"The Day That You Bloom" a Commencement Address by Sherri L. Smith - Goddard College

Hi Everybody!  Welcome to commencement.  Okay, let’s just acknowledge it’s been a really weird week.  And a really weird year, and the year’s only just begun.

I spent some time last weekend thinking about what I was going to say today.  And then Tuesday happened.

[Editor’s Note:  Democrats flipped the Senate with the historic elections of Rev. Raphael Warnock and Jon Ossoff in the state of Georgia .]

And then Wednesday happened.

[Editor’s Note:  President Trump’s speech incites his supporters to attack the U.S. Capitol during the Electoral College vote count to certify Joe Biden’s presidential win. It is the first such attack since the British burned the Capitol in 1814.]

And then I thought, Well, I just don’t know anymore.

So, I do think it’s still relevant, but I want to preface with this:  I was thinking earlier today, I think I’ve been to about 22 graduation ceremonies in my life so far.  And the best one, the one that I think about and compare all other ceremonies to was in, I think it was 1991.  My big brother was graduating from the University of Illinois in Champaign, Urbana.  It’s a massive school, state school, so they have all sorts of ceremonies.  They don’t do an all-university one because there’s too many people, and no building can hold them, but they do it for your major.  And the Black Student caucus had its own graduation.  And that was my pinnacle I think of because it was all these young African Americans going across the stage, and their families and their friends celebrating their achievements as the achievements of an entire people.

So you get these kids who are wearing Kente cloth on their robes and some are pimping across the stage and waving because they know so many of the people there. And at one point, and I’m going to… I can’t believe it, I’m still getting choked up!  I’m pulling out my handkerchief, which says blowhard because I’m speaking today.

This one young Black man goes across the stage to get his diploma, and he is wearing the eight-sided cap that means that he has just gotten his PhD.  And when they announce that he’s getting his PhD, the crowd blows the roof off the building with their cheers.  It was just a roar!  A roar of pride, of acknowledgement. And it does choke me up to this day because it felt…ancestral. It felt like it was reaching back through time to the very beginning of our presence in this country. To this moment in 1991 where this young Black man said, “Yes, I can.”

I was thinking about that today, and realizing that this graduation of the Goddard class of Spring 2021 is the equivalent of that moment.  Because of the year that you have been through.  Because of the struggle.  Because of the challenge of staying human, staying present, staying creative in one of the most shattering years we have had in this country.  And you have each done it.  And I know it has not been easy. And I know because I was reading annotations I didn’t feel like reading. I don’t know how you guys managed to write them but you fricking did.

You did, and I am so impressed. I am so proud. I am so thrilled to know that there is a crop of writers coming out of Goddard that have earned their stripes in a trial by fire. And if you can make it through 2020 and have a graduate thesis to show for it, you can make it through a career and have a lot to show for it.  A proud, proud career as a writer.  And it starts today.

So that’s my blowhard, sobby part of my speech. I now want to explain why I’m wearing this pink jacket, and that will come clear in a moment.  I was thinking about this:

But I was thinking about spring and the idea of springing back. Like, you know, to bounce back, because we have been trying, depending on who you are, for the last week, the last year, the last four years, the last lifetime, to spring back into a position where we feel strong again.

So I did what I often do, [which] is I  go to the dictionary. And I looked up the word “spring,” and the Oxford English Dictionary surprised me with this terminology.   “Spring” is defined as “the place of rising or issuing from the ground, the source or head of a well stream or river; the supply of water forming such a source.”  And I was really struck by “the place of rising.”  It goes hand in glove with the word “commencement.” We talk about graduations and, “Oh, congratulations grads!” which… graduation tends to mean layers of something,  but commencement is a beginning.

And here we commence. This is your new beginning.

As I said, I live in Los Angeles, and we’ve been on lockdown here since March.  Right before my birthday we sealed ourselves inside and I have been pretty diligent with that, and it’s been hard.  And I know you know that it’s been hard. You have all gone through it yourselves. So New Year’s Day came, and I got myself a gift. I went to one of the local botanical gardens here and I bought a membership with the idea that I can be socially distant and still be in nature and not just– I know my eight square blocks little walk very, very well, but now I can go to this garden that is an earthy sort of garden. There’s a stand redwood trees, and I find that to be very peaceful.

And so I went.  I went last week, and that’s why I was thinking about you on Sunday of last week.  I was sitting in the redwoods, and if any of you have taken my Enchantivism class, you know that I dig trees and I talk to trees.  This go round, I did not talk to the trees.  I just wanted to be in them. And as I’m coming out of the redwood grove. I could see a flutter of pink through the trees, and I couldn’t figure out what that was. It’s too early for cherry blossoms, even in Los Angeles.

As I got closer, I realized it was an art installation called “The Wishing Tree” by a gentleman named Kaz Yokou Kitajima, who is a master gardener, and his specialty is Japanese landscape. And he has taken the old stumps and branches of a downed oak tree and created a new tree.  Each leaf on that tree is a slip of paper about the color of this jacket.  And pencils are set out for people to write their wishes for the new year and hang them from the tree. This reminds me of Lisa Chambers [who] was just reading about the slips of wishes at the Shinto shrines that she mentioned in her reading.  It is very much styled after that.

So I got as close as I could because people were socially distancing, but there were too many people for me because I’m a shut-in– I’m a writer!  I got a little bit closer and read one of the slips.  It was a partial quote, written by a woman who followed it with, “I wish for peace and happiness for Armenia,” a woman named Maretta N.  She had signed it.  But the quote really struck me and I wrote it down. I looked it up later on and it turns out that this is from Franklin Delano Roosevelt’s last message to the American people in 1945,  April 12, 1945.  It was written a few hours before his death, and it was meant to be shared with the nation. It was going to be a radio message sent out on the birthday of Thomas Jefferson, commemorating what he considered to be “the greatest of all democrats with a small d.”

And the quote is this:

That struck me as relevant on Sunday.  It became critical on Wednesday.

His [FDR’s] is entire message ends with, “The only limit to our realization of tomorrow will be our doubts of today.  Let us move forward with strong and active faith.”

So these were the words that were in my head as I walked away from the wishing tree.  I stopped to look at it from a distance.  And I thought to myself, What if we could write a novel or play or a collection of short stories or a movie or something that looked like that?  Like this tree that is made up of a tree that’s no longer alive.  Dead pieces that were cobbled together to make something that’s living and full of wishes.

In a way the tree is a short story collection. It’s all of these people’s hopes and dreams.  And then I realized that we have.  That you graduates today are leaves on this wishing tree.  Because you each had your own wishing tree and that had on there somewhere: I want to go to Goddard college. I want to get a master’s degree. I want to be a writer.

And today is the day that you bloom.

Today is the day that you get to go out into the world having achieved that dream.  And so, the Spring class of 2021 is Goddard’s wishing tree. It’s our MFAW wishing tree for this moment.  So I want you to savor the moment.  Your fruit is ripened today. It’s that perfect peach.  Eat the peach! And then, after you’ve had a chance to savor it and enjoy it and celebrate with those you can celebrate with near and far, take the seed that is left over, and plant it in fertile ground so that new wishes can bloom for the future.

Congratulations, graduates. I’m so impressed by you, delighted to know you and have worked with you, and I wish you the best of all possible worlds.

Sherri L. Smith is the author of seven award-winning young adult novels and middle grade novels, as well as nonfiction for kids. Her books appear on multiple state lists and have been named Amelia Bloomer and American Library Association Best Books for Young People selections.  She teaches in the MFA Writing program at Goddard College in Vermont.  Learn more at www.sherrilsmith.com

Writers- you can’t possibly bloom if you don’t plant the seed. Immerse yourself in a collaborative community of diverse professional writers from every genre and style who are serious about their commitment to craft. Gain insights and advice from different faculty advisors every semester. Inquire about getting your MFA in Creative Writing today or email admissions@goddard.edu. Tell them Sherri L. Smith sent you. 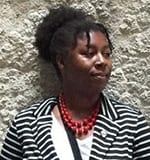