Alumna Doyle Canning and The Center for Story-based Strategy

I met Doyle Canning (BA EDU ’02) this fall during the National Day of Mourning in Plymouth, Massachusetts. The Day of Mourning is organized every year on Thanksgiving by the United American Indians of New England and builds a powerful counter-narrative about Thanksgiving.

Imagine my delight when I learned that Doyle is a recent Goddard alumna (Doyle spent two years in the undergraduate on-campus program and then transferred to the BA in Education program.) After graduating from Goddard, Doyle co-founded The Center for Story-based Strategy (CSS, and formerly Smartmeme), an organization that uses narrative for social change and is based in Oakland and Boston. As someone who is interested in storytelling as a tool for social justice and repair, I wanted to know more about what Doyle does.

A few days after the Day of Mourning, Doyle answered my questions about The Center for Story-based Strategy’s approaches to political strategy and critical pedagogy. Doyle also described Goddard’s impact on her life, politics, and work. Below is my brief interview with Doyle:

Karen Werner: Can you briefly summarize what Center for Story-based Strategy (CSS) does?

Doyle Canning: The Center for Story-based Strategy provides training and creative strategy consultation to social movement organizations working for social, racial and ecological justice. Activists and organizations come to CSS to learn how to better tell their story, change the framing for their campaign, and create successful messages and narrative strategies.

KW: Can you give an example of how the CSS helped an activist group use story more effectively in terms of achieving its goals?

DC: This year, I worked with a team of CSS strategists to develop the narrative and name for the Right to the City Alliance’s Homes For All campaign. This campaign fights to keep families facing eviction or foreclosure in their homes, secure homes for those currently without an affordable place to live, and unite a broad based constituency with a vision of housing as a human right. The alliance recently succeeded in their efforts to oust Bush appointed FHA chairman Ed DeMarco and have him replaced by Rep. Mel Watt, a major victory!

KW: What prompted you to co-found the Center for Story-Based Strategy?

DC: I joined the collective in 2003, at that time it was called “smartMeme.”  There were some embers of the idea to create a program to train activists to win “the battle of the story.” We were living in the Bush years, and involved in building the antiwar movement at a time when the media climate was overwhelmingly pro-invasion. We were losing the battle of the story. The collective was a group of fellow travelers who could see that the conventional approaches to social change making generally weren’t working at the scale needed to save the planet from run away climate change. (This is still true.) So we set out to create a curriculum to encourage rethinking of social change strategy in terms of narrative. We started to train and consult with organizations on media and campaign strategy, offering memes and messaging that could reach broader audiences and move social change agendas at scale.

KW: How did your Goddard experiences influence the way you approach political activism?

DC: As a 19 year old self-taught environmentalist until my studies at the Institute for Social Ecology (ISE), I knew the earth was in trouble, but I didn’t really have an analysis of why or what to do about it. Social Ecology is where things really started to click for me. The first lecture I attended with Murray Bookchin was about the meaning of the word “radical.”  He told us that it is not tactics that are radical, it is ideas. Radical means to get at the root of things…to not be content with superficiality. He talked to us about what it means to be a radical, to think and rethink and keep digging and keep questioning, and this has shaped me to this day.

I became involved in social action through the networks that touched Goddard and ISE. That’s how I heard about the protests at the World Trade Organization in Seattle and I went with some friends from Vermont; that experience was incredibly formative. It was the first time I had experienced people power on any scale, with 50,000 people blocking the streets and stopping the global corporate elite in their tracks. I knew completely, in my very bones, that this is where I was needed and where I wanted to be. From there, I connected with a whole global network of rabble rousers and media makers. After Seattle, I never looked back.

KW: What other kinds of things did you study and do while you were an undergraduate at Goddard?

DC: I started in the on-campus undergraduate program in 1999. I studied a wide range of things that year – from social movements to Black history to theater, dance, ceramics, and color theory. I attend the Institute for Social Ecology summer program and was immersed in a curriculum of political theory and permaculture, and things clicked for me there in terms of connecting my values of ecology and social justice. I was a work-study student, and my jobs included working in the kitchen, in the internship placement office, and at the women’s center, which was a great experience. We brought in great guest speakers and created women oriented spaces for celebration and learning. I was involved in leading our campus wide community meetings and that’s where I first learned to facilitate large groups.

Over my years I also studied music, political art and Latin American history. I studied abroad for a field semester in Australia, sending packets on Aboriginal indigenous political history and colonization, modern day fights against uranium mining and old-growth logging, and the history of the brutal prisons in Tasmania where today’s torture tactics where basically invented.

In the later 2 years I focused my studies on critical pedagogy, pursing the BA in Education with licensure in secondary social studies. I was interested in changing power relationships and in teaching ideas. Studying how people learn and how to create liberatory educational settings was inspiring to me. Teaching history made sense. Doing my student teaching at U-32 High School in Montpelier was a blast!

KW: What was the topic of your senior study/ final project?

DC: My senior study was on privatization in public, k-12 education, and examined provisions in global trade agreements such as NAFTA and GATTs that pave the way for a corporate takeover of public education. I visited a privatized elementary school in Philadelphia run by the Edison company which had taken over that school district. I really struggled with the question of charter schools, as many charter schools are able to do some progressive things pedagogically – but charters as a trend represent a kind of creeping privatization that will continue to disadvantage the most marginalized kids. My thesis was an argument for defending public education as a public good, while also transforming the public education system to better serve the goals of creating happy kids and a free, just and democratic society.

KW: Anything else you want to add?

DC: Goddard is a very special place! Thanks for the opportunity to pause and remember my time there. 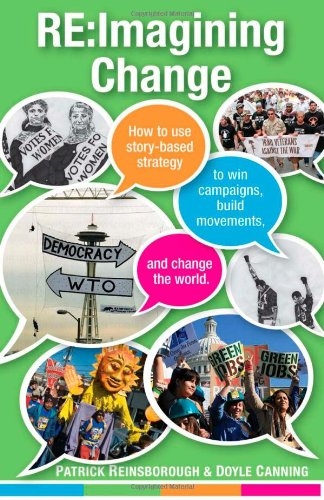 Want to learn more about story-based strategy? Check out Doyle’s book, Re:Imagining Change: How to Use Story-based Strategy to Win Campaigns, Build Movements, and Change the World and watch a video below.