Conversation and change in a world reaching for justice 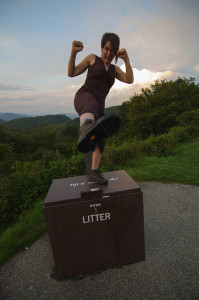 Susan Sakash, a graduate of the Goddard Graduate Institute‘s Master of Arts in Social Innovation & Sustainability program, is a change agent and storyteller responsible for organizing on the Goddard campus, moments before her commencement, four and a half minutes of silence as part of the nationwide remembrance of Michael Brown.

Susan writes: “I felt it was important to hold that space for Michael Brown and all the others who’ve lost their lives to police violence since Brown’s death.  The land where Goddard sits is potent; I look forward to gathering with others one final time to call upon that powerful energy – and our own – to honor these lives and this movement.”

Susan recalls that “Michael Brown was killed on August 9th, in the middle of the Goddard Graduate Institute fall residency. I remember reading a post that day on Facebook along the lines of ‘If you do anything today, read about this, before Michael Brown’s story fades away like so many other young Black males’.  Thankfully, his 18-year-old story that ended that day, did not fade away but instead ignited a movement.”

Susan is a New Orleans based activist who is involved in a multitude of radical projects. Her work at Goddard to facilitate the four and a half minutes of silence reflects her commitment to the Black Lives Matter movement.

“The movement’s mobilization has done much to shift my consciousness of the myriad ways that the systems that have built the mythos of the American Dream are also destroying the dreams and lives of many Black and POC [people of color] communities in the United States.  This movement’s creativity and courage has impacted my approach to study at Goddard and living at home in New Orleans; I know it has also impacted the academic, creative, and spiritual practices of many of my fellow Goddard students. And as this movement continues to grow stronger – and as Black lives keep being cut short – I believe that Goddard, as an institution and as a community of activists, healers, and poets, has much to offer as allies and contributors to this movement,” she said.

Susan’s graduate work, The Solidarity Economy as Social Innovation, unpacked “the solidarity economy framework” and “economic democracy” by grounding them in individual/collective visions of what a more just and ethical economy looks and feels like. With research based largely in New Orleans, she located examples of the solidarity economy occurring within the city’s local food system, and how these reflect what she calls community-envisioned and enacted social innovation in action.

Susan’s “hope is to start a conversation about how to strengthen, and what stands in the way of, the efforts of activists, social innovators, and community economic developers who are working to build true community wealth.” Her ability to tell stories, and hear them, makes her in many ways a quintessential Goddard activist.

Note: an abridgment of this story appears in the article, “Is Activism Dead?” in the Clockworks Fall/Winter 2015 issue on page 11.