Addie Tsai (she/they) is a queer, non-binary writer and artist of color, who lives and teaches in Houston, Texas. She received her Master of Fine Arts from the MFA Program for Writers at Warren Wilson College and her PhD in Dance from Texas Woman’s University. Addie collaborated with Dominic Walsh Dance Theater on Victor Frankenstein and Camille Claudel, among others. She is the author of the young adult novel, Dear Twin, and has been published in many literary journals, such as Nat. Brut., Foglifter, The Offing, The Collagist, The Feminist Wire, and elsewhere. Addie is a staff writer at Spectrum South, nonfiction editor at The Grief Diaries, associate editor at Raising Mothers, and assistant fiction editor at Anomaly. She is the founding editor and editor in chief at just femme & dandy, a forthcoming literary and arts magazine on LGBTQIA+ fashion.

I am a queer, non-binary writer and artist of color, a dance scholar, an image maker, and an educator deeply invested in cultivating relationships with my students and artistic community that is borne from a practice of listening and of asking questions. Although my artistic journey initially began as a poet and a writer, I have always been deeply wedded to all forms of artistic practice.

My experience as a mirror twin and as a biracial person has intrinsically informed how I move through the world, and the way in which I use my artistic expression to explore the liminality and the layers of selfhood and subjecthood that I am always negotiating. During my entire childhood I was surrounded by performance, as my father spent his free time acting in Chinese dramas that his drama group in Houston produced for the Chinese community. At the same time, my father had made a decision to not teach us Mandarin, and this tension between the visceral and the incomprehensible was a duality that I would find myself teasing out throughout my artistic practice and one that held much in common with other dualities I would face in my life. In 2011, I began a years-long collaboration with Dominic Walsh and Dominic Walsh Dance Theater, most notably as co-creator of Victor Frankenstein and narrative collaborator with Camille Claudel, and all those years of witnessing my father’s productions would come to life again, instilling in me the instincts needed to bring my own theatrical worlds to life. What I didn’t know initially, and what I would learn through the process of this work with Dominic, was that I was honing the skills of dance dramaturgy—initially, through research, offering contextual information that would inform the work, but also acting as the director’s “third eye” for the production. It was at this time that I would also begin to develop a photographic practice for my own development as an artist, almost solely working with film photography in order to try to understand my own selfhood within my lived experience as a twin and as a person split between two racial backgrounds (as well as, which I would discover within myself much later, my non-binary identity split between masculine and feminine). To that end, I’ve spent the past several years making film and digital double exposure self-portraits.

As a dance scholar, I’m interested in how dance operates within popular culture, and I seek to interrogate the power that ideology holds within an embodied expression, both in remarkable as well as harmful ways. My dance scholarship focuses on Black studies and white masculinity, how dance is racialized within popular culture, a lineage that travels back to American vaudeville and minstrelsy. My dissertation, “(Straight) White Men Can’t Dance: The Dancing Body as Racial and Gendered Ideology in American Popular Culture from 1980 to 2018” charts the evolution of the (straight) white man dance trope, in which white men are presented as non-dancers or bad dancers in American popular culture, to discern how dance in popular culture reflects gender and gender ideologies. I am also interested in bringing to the foreground the power of dance and movement vocabularies within contemporary music video, where dance is often the engine behind its popularity, while the choreographers and choreographies that inspire the movement often remain in the background or erased from the spotlight.

My writing practice has had a full and complex trajectory. I received my Master of Fine Arts from Warren Wilson College in poetry, and since then, I’ve found myself more drawn to prosaic forms of the novel and hybrid nonfiction, while utilizing the craft elements of rhythm and symbol in those works. The queer Asian young adult novel Dear Twin, my debut book and my epistolary narrative hybrid, was published in 2019. It is a work that blends techniques from the young adult and literary nonfiction genres, and is also one that emerges from the myths that I lived through within my own childhood. It represents both a long look backward at my experience with childhood trauma and identity, as well as imagines a different queer youth narrative for myself if I were to have lived in a more progressive and accepting time. My other work traverses genre and form, and explores prose and lineated poetry, hybridity, fiction, and nonfiction to address race, gender, sexuality, trauma, and healing. 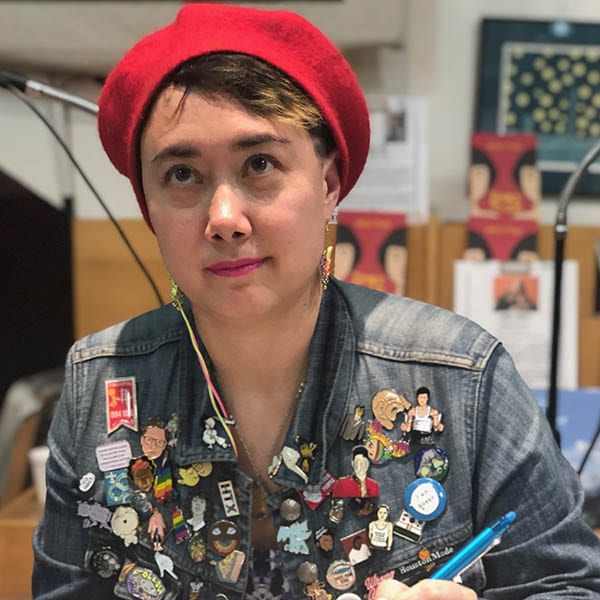