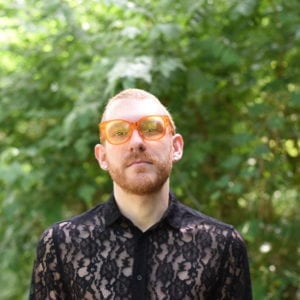 Stephen S. Mills is the author of the Lambda Award-winning book He Do the Gay Man in Different Voices (2012) as well as A History of the Unmarried (2014) and Not Everything Thrown Starts a Revolution (2018) all from Sibling Rivalry Press. He earned his MFA from Florida State University. His work has appeared in The American Poetry Review, Columbia Poetry Review, The Antioch Review, PANK, The New York Quarterly, The Los Angeles Review, The Rumpus, and others. He is also the winner of the 2008 Gival Press Oscar Wilde Poetry Award and the 2014 Christopher Hewitt Award for Fiction. Two of his books have been placed on the Over the Rainbow List compiled yearly by the American Library Association. He recently turned his attention to playwriting including the completion of two plays Waiting for Manilow and Men Like Us, which had an excerpt featured as part of Pride Plays in June of 2020 sponsored by PlayBill. He lives in New York City with his partner and two schnauzers.

As a teacher, I strive to create an open and honest dialogue with my students to help foster their growth as a writer. My goal is never to make a student write like me or like anyone, but to find their own unique voice. This includes exploring how their voice fits into the world around us. I’m an avid believer in the idea that you can’t be a good writer if you aren’t a good reader. I hope to push and challenge my students to read vastly including works outside of their genre. I also recommend exploring other art forms from film and television to the visual arts.

I’m also drawn to longer and interconnected work, especially in poetry. I will help students keep the bigger picture in mind. Together, we can explore how to build a collection and how to think about the conversation that is happening between individual pieces.

Another key aspect of any MFA program is learning how to receive and utilize feedback. As a teacher, I will help guide students in that process and will engage them in conversations about their work that will hopefully be challenging and fruitful.

My own work is interested in sexuality and gender, but also our relationship to the often-violent world we inhabit, which affects every relationship we have. As a queer person, I’m particularly interested in how that manifests for the LGBTQ community. My work also explores our connections to pop culture as a map for understanding ourselves. Pop culture, in many ways, has become our universal language—a short-hand for how we classify and evaluate our own experiences. I’m heavily influenced by the New York School, but also find inspiration in history, visual arts, film, television, and my own personal experiences.