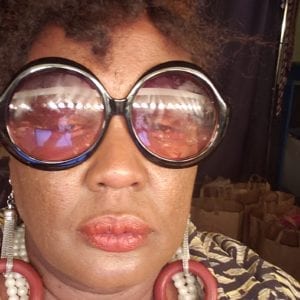 Edris Cooper-Anifowoshe is an accomplished actor, director, writer, working in the Bay Area for almost 40 years. She is the founding artistic director of the award-winning ensemble Black Artists Contemporary Cultural Experience (BACCE), with whom she has directed and produced 10 critically acclaimed productions. A former member of the San Francisco Mime Troupe, Edris has both directed and acted in productions for the collective. She has directed locally and nationally at Trinity Rep, Capitol Rep, Southern Rep, Carpetbag Theatre, Alabama Shakespeare Festival, WaterTower Theatre, Curious Theater, Sf Playhouse, Magic Theatre, TheatreWorks in Palo Alto, and the Lorraine Hansberry. She has received recognition as a director from Dallas’ Rabin Awards and Backstage’s Dean Goodman Award for Excellence. Edris has appeared as an actor in productions at SF Playhouse, Aurora Theatre, Magic Theatre, TheatreWorks, Theatre Rhino, Word for Word, Lorraine Hansberry Theatre, Campo Santo, San Diego Rep, and Arts Theater in Nigeria. She was a core member of Rhodessa Jones’ Medea Project: Theater for Incarcerated Women for 11 years. Her plays, Adventures of A Black Girl In Search of Academic Clarity and Inclusion and There are Women Waiting are published in the anthologies, solo/black/woman and Black Medea, respectively. She holds an MFA in Theater from the University of Iowa. In addition to BACCE, Edris is a member of Campo Santo Theatre company, Word for Word and the National Institute of Directing and Ensemble Creation. Edris joined the faculty of Goddard College Master of Fine Arts in Interdisciplinary Arts (MFAIA) in 2021.

As a theatre artist, scholar and teacher, I am interested in the intersection of the conceptual and the lived experience of the acting process.  I seek to find ways to bring the student to the lived experience of the acting process. An actor’s preparation for a role leads the actor to execute a series of psychophysical actions that result in an experience that is more vivid than the sum of the actions might imply.  The actor is experiencing a synchronous connectivity to the actor’s past and his own, the character’s physicality and his own, and the characters mental states – moods, emotions, hopes, fears and his own.  The first two are more likely to have found a resolution in the lived experience while the latter can often be wildly divergent and dichotomous.  Still, all work in service to the actor’s creation and realization of character and further exploration of this phenomena expands the idea of what an actor does and can accomplish.

I create theatre, most of it is impolite.  I am drawn to the provocative, the taboo and the avant-garde.  I value collaboration and innovation.  As a Black female artist, I aim to operate outside of all marginality. My company, Black Artists Contemporary Cultural Experience, is intentionally multi-ethnic, multi-generational and non-hierarchical.

My work in the professional theatre has always included teaching on some level, whether working with inmates in the city jail, in youth programs located within professional performance organizations and theatres or private coaching.  My work and commitment to ensemble seems to have been strengthened by these energizing encounters and is easily realized in places, like universities, where people have gathered for a larger purpose than the creation of one singular moment of artistic production.   This commitment to a larger purpose necessitates a wealth of investigations into the human conditions as well as organized and personal responses to those conditions.  I find that the liberal arts university supports and engenders that investigation.  It is this environment that secures an understanding of theatre and performance as a humanistic practice.   It is within this humanistic endeavor that I locate my own theatre practice – academic and professional, finding allies in other art forms and additional alliances within the social disciplines   of anthropology, philosophy, etc. For me, the opportunity offered through an alignment of purposes between the liberal arts training and artistic practice is a valuable enterprise.

My teaching repertoire is the result of a diversity of influences. I have encountered a broad range of actor training methods and performance techniques.