VISITING HOPE
Sue Long, Port Townsend Marine Science Center Board Member and Port Townsend Community Life Staff Member at Goddard opened the Center for a personalized visit by MFAIA-WA Workgroups and Faculty Advisors Sharon Siskin, Devora Neumark and Laiwan. Sue led the group through the exhibit Learning from Orcas: The Story of Hope, wherein the skeleton of Hope, a transient female orca that beached and died locally in 2002, now hangs in the Natural History Building at Fort Worden State Park. Sue explained how a massive communal effort was involved in researching the Orca’s death and preparing her skeleton for display. The MFAIA group was privileged to learn many things about this whale, the community of Orcas living along the west coast and the interdisciplinary process involved in developing this exhibit.

Full-time Assistant Professor at Marymount Manhattan
Alumna Elisabeth Motley (MFAIA-VT ’14) was appointed Assistant Professor of Dance at Marymount Manhattan College, NY. She is a choreographer and teacher with an active dance company in New York City who has worked professionally both nationally and internationally since 2003. She has taught at Manhattanville College, Peridance Center, and the Julliard School. Elisabeth has been awarded grants from the Mertz Gilmore Foundation, the Foundation for Contemporary Arts, the New York State Council for the Arts, the Andrew Mellon Foundation and was the recipient of the Hector Zaraspe Choreography Award. She also has a private practice teaching Pilates and exercise and works primarily with the elderly. 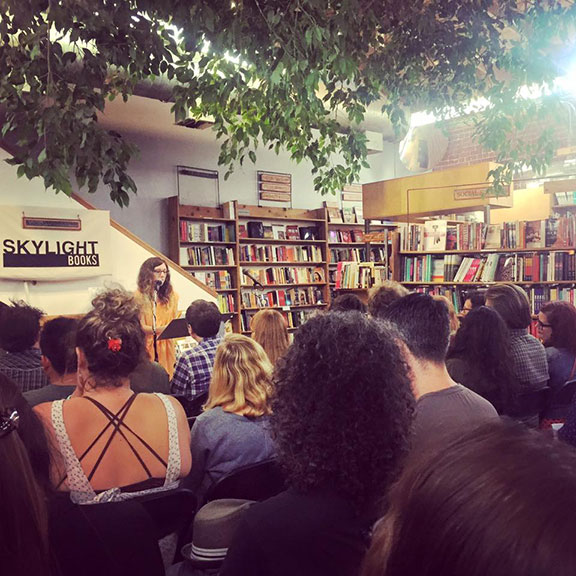 Princess Grace Foundation Fellowship Awarded
Alumna Megan Sandberg-Zakian (MFAIA-VT ’11), one of the 2015 recipients of the Princess Grace Foundation Fellowship, will use the award to work with the Merrimack Repertory Theatre (MRT) in Lowell, MA as their Director-in-Residence. Megan’s other upcoming projects include: The Broken Record at Fringe NYC; the developmental production of Catherine Trieschmann’s Holy Laughter (October 2015) at WAM theater; It’s a Wonderful Life: A Live Radio Show at MRT (November 2015); and The Convert at the Central Square Theater (January 2016). 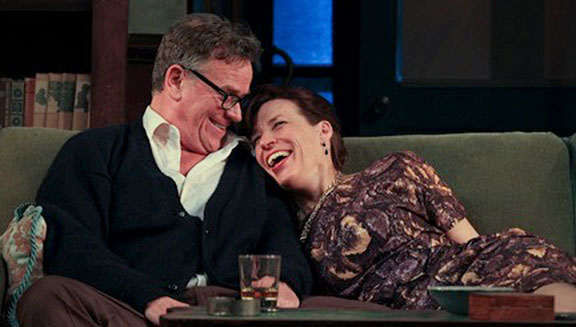 Pearce Bunting as George, and Catharine Slusar as Martha, in Theatre Exile’s production of Who’s Afraid of Virginia Woolf, by Edward Albee. Photo by Paola Nogueras

ROOTED AMERICA, A Van Residency
Current MFAIA-VT student Suchi Branfman has recently completed a 32-State mobile artist residency. Rooted America is a traveling residency chronicling a trail of rhythm, voices, movement and images. The residency provided a platform for Suchi to bear witness to a wide variety of art forms that have been nourished throughout the United States, while evidencing the impact this work has had on both the community and the artist, as well as on the changing the fabric of society. The residency also included the creation of an archive, recorded through prints and movement. 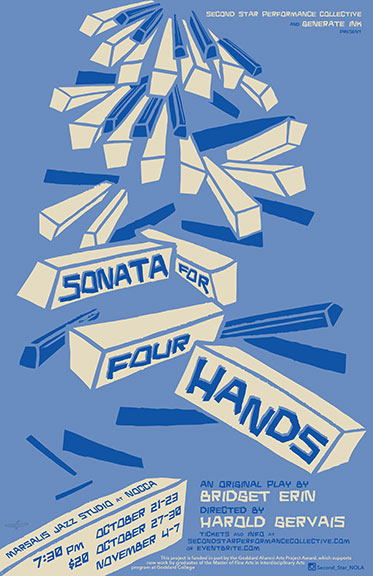 Sonata for Four Hands
Alumna Bridget Erin‘s (MFAIA-VT ’15) play, Sonata for Four Hands, opens in New Orleans on October 21st The play tells the story of two young pianists who take on a difficult four-hand sonata by the Russian composer Anton Rubinstein and deals with the surprising ramifications the piece has on their relationship and the course of their lives. Sonata for Four Hands is a co-production of Generate INK and Second Star Performance Collective. This project is funded in part by the Goddard Alumni Arts Project Award, which supports new work by Goddard College MFAIA graduates 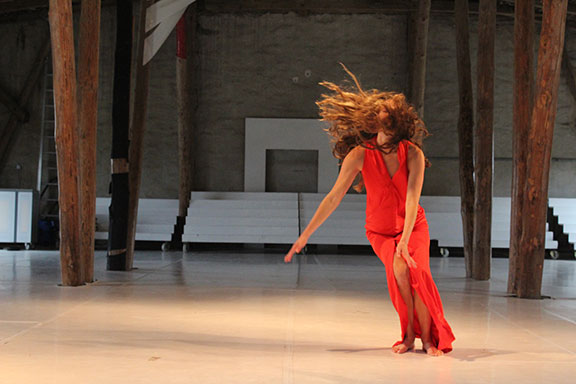 Hanna Satterlee in performance at the Con/VERGE residency, PONDEROSA Movement & Discovery Center in Stolzenhagen, Germany. Sept, 2015. Photo: Thanks to Marisa Jane for Con/VERGE.

2015 Pearl Fund Scholarship Recipient
Current MFAIA-WA student Hanna Satterlee is the recipient of the 2015 Pearl Fund Scholarship, awarded to her in support of her transition from Vermont to Washington for her final Goddard residency. This transition was necessary on account of Hanna’s recent European travels, which included her acceptance as an Atlas choreographer at the Impulstanz International Dance Festival (Vienna, Austria) and her work as a collaborator in the Converge Interdisciplinary Performance Making Residency at Ponderosa in Germany. 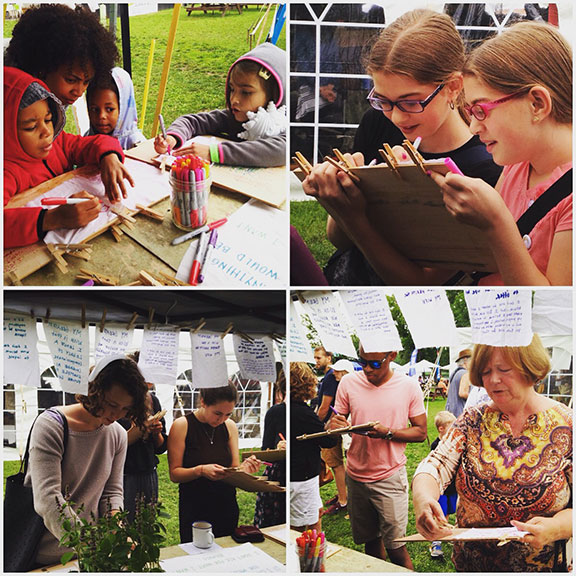 All images come from the live installation of Dawn Breeze’s Art of Worth public event in Hudson, NY. Images courtesy of the artist.

The Art of Worth
What is your greatest wish? If you could ask for anything for yourself, what would it be? Why don’t you ask? These three questions where the beginning—or the seeds, of artist and current MFAIA-VT student Dawn Breeze’s new interactive art project, The Art of Worth, Part 1: Ask Anything. Soon after Dawn began collecting online responses, she quickly realized that she wanted to share the responses with the public and also offer a living gift that could be a bridge between the ideas grown from these questions and real life. So she grew over 400 wishing plants (medicinal herbs) from seed to give away to participants. This past summer, Dawn presented her project at various fairs in NY and has since collected over 500 individual responses to these questions, both in person and online. To learn more about this project and read the collected response view: www.dreamsgrow.blogspot.com. This is one of three projects in which Dawn’s work appeared this August. Dawn also received a Massachusetts Arts and Culture Grant.

2nd Phase of the Polish Exchange Project: “Where is your nature?”
Following up on her initial trip to Szczecin (Poland) in the late spring (as mentioned in a previous MFAIA blog), MFAIA-WA Faculty Advisor Devora Neumark will be travelling to install the collaborative work titled “Where is your nature?” at the Galerie Zona Sztuki Aktualnej in December. The project is part of the 7th edition of DouBle-Stéréo (DBS) and consists of drawings by participants inspired by audio prompts that Devora recorded and distributed and in response to the question: “Where is your nature?” The audio files (each 60-seconds long) are of sound recordings taken in urban parks and forests that Devora made while last in Szczecin. The public will also have the opportunity to create drawings in response to the same audio files and prompt. http://www.2303.fr (in French only). 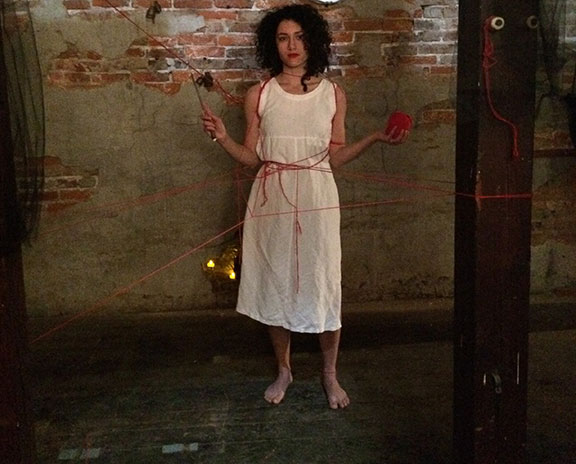 Hall of Haunts
For the past three years the Medium Theatre Company has created five original plays for Rutherfurd Hall, a historic 40-room mansion in NW New Jersey. The Mediums’ October show, dubbed Hall of Haunts, takes some 800 visitors through the Hall on theatrical small-group tours of the mansion. This year, some 20 Mediums, directed by current MFAIA-VT student Morgan FitzPatrick Andrews, will be inaugurated the Hall of Haunts in the crumbling Rotunda Sanctuary in Philadelphia, as well as be part of their annual sojourn out to the wilds of New Jersey. NJ dates are Oct 23 and 24, with Philly shows on Oct 28 and 29. Tours run multiple times per hour. See www.themediums.org for details. 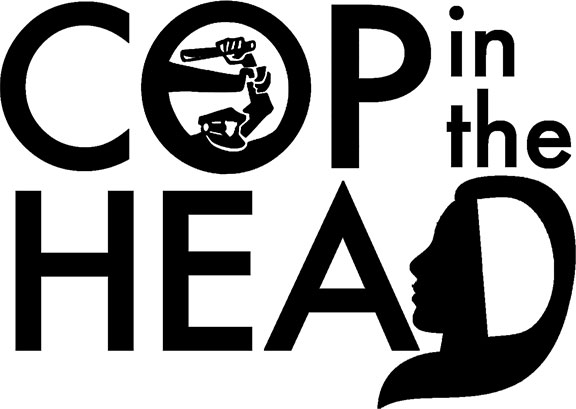 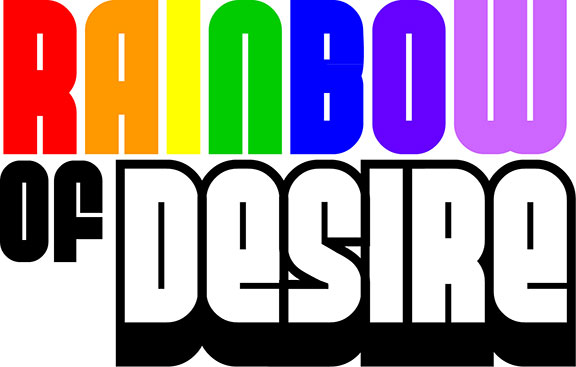 Cop in the Head and Rainbow of Desire logos by Morgan FitzPatrick Andrews. Free for all to use!

Theatre of the Oppressed Workshops
Morgan FitzPatrick Andrews is running two-day workshops at The Whole Shebang, a new arts space in South Philadelphia. These workshops focus on social justice and internalized oppression through techniques that Morgan learned with Theatre of the Oppressed founder Augusto Boal: The Cop in the Head (October 10th) and The Rainbow of Desire (November 14th) People can sign up for either workshop by emailing 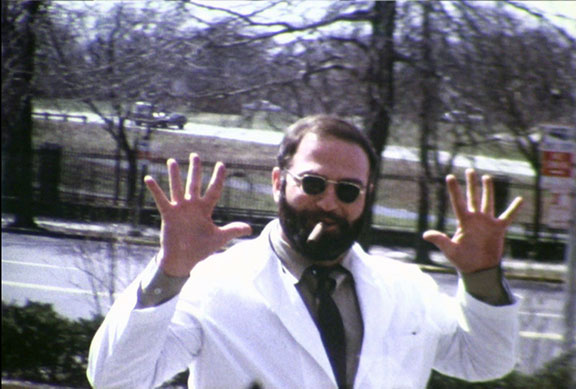 Indigo Mind: Celebrating the Work of Oliver Sacks
Petra Kuppers’ Salamander project will include an installation as part of a special group exhibition celebrating the work of esteemed neurologist Dr. Oliver Sacks. Curated by Arianne Gelardin and Cara Levine, Indigo Mind: Celebrating the Work of Oliver Sacks features artists who explore a range of brain and body phenomena examined in his research, presenting the influence he has had on our understanding of the human condition in its limitless variation and form. Each week Indigo Mind will highlight distinct physical and neurological states, referencing Dr. Sacks’s writings and inviting the public to engage in activities and works that shed light onto these unique experiences. September 26 – November 5, 2015 at StoreFrontLab, 337 Shotwell Street in San Francisco.

Under mentorship with Laiwan, Anne Riley made whole body denim wall drawings for her project “that brings the other nearly as close as oneself”. A behind the scene view of the performative work being documented by videographer John Fukushima. Photos: Laiwan

Mentorships funded by the BC Arts Council
Emerging artist Leah Weinstein has been awarded a 2015-16 mentorship with MFAIA-WA Faculty Advisor Laiwan from the British Columbia Arts Council’s Early Career Development Grant in Canada to include work exploring artist run centre mobility. For 2014-15, emerging Indigenous artist Anne Riley was awarded the same grant to work with Laiwan. Riley recently culminated their mentorship with an intriguing body of work titled “that brings the other nearly as close as oneself”, a title from the essay On Touching—The Inhuman That Therefore I Am (v1.1) by renowned feminist theorist Karen Barad. Riley’s work explores queer touch and the Indigenous lesbian body. Her work is currently on exhibit in a group show until October 24, 2015 at the Western Front Gallery, 303 East 8th Ave, Vancouver, British Columbia.

Homeless Project
Alumnus David Sokal (MFAIA-WA ’14), in collaboration with his son Ira, is currently working with homeless residents of “Nickelsville”, a Seattle-based tent city with about 30 inhabitants. David and his son are supporting the residents as they set up meetings with people in Ballard, the Seattle neighborhood where the tent city will be relocating, in an effort to create a more welcoming climate. To date, story sharing by the Nickelsville residents has been an effective means of making meaningful connections. David is currently exploring ways in which to include a greater variety of artistic elements in the project while maintaining a high level of ethical engagement. 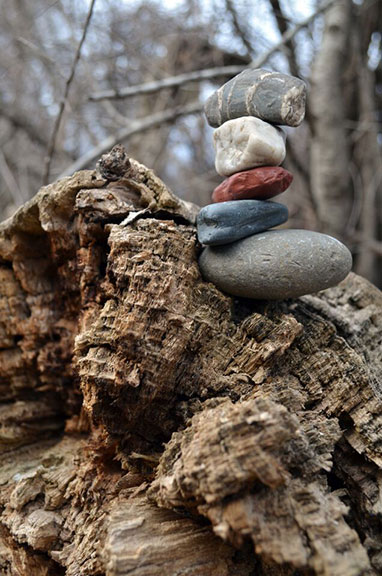 Volkmann Exhibits of Contemplative Photography Practice
Alumna Julie Volkmann (MFAIA-VT ’15) will be exhibiting her works in two locations in the greater Chicago area. Seventeen of her WayMaking Cairn images are currently on exhibit through the end of October at the northwest Indiana Hammond Public Library (564 State Street). Julie will be making a presentation to the public about her practice on Saturday, October 24th at 2:30 pm. One of Julie’s images, Beautiful Decay, will also be included in the Union Street Gallery exhibition Re-Picturing Photography exhibit, which was curated by Allison Grant of the Museum of Contemporary Photography in Chicago, on display through the end of October. 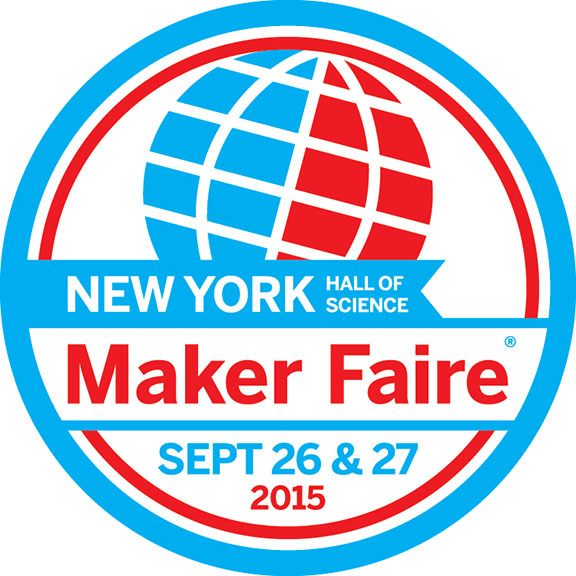 Cardboard Teck Tilts the Future
Current MFAIA-VT student Ben t. Matchstick and Pete Talbot just unveiled the final version of an invention they describe as “a total game changer”. On September 26 – 27, 2015, the Montpelier and Burlington-based Cardboard Teck Instantute (sic) demonstrated the first mass-produced build-it-yourself cardboard tabletop pinball machine (dubbed the PinBox 3000) during the World Maker Faire at the NY Hall of Science in Queens, NY. The marble and gravity-powered PinBox 3000 overlaps STEM science and technology requirements with dynamic arts initiatives The first prototype for the PinBox 3000 came after a two month maker-in-residence at the Generator, Burlington’s makerspace. After dozens of iterations, and months of rigorous playtesting from Montpelier’s River Rock After School Program, CTI settled on a version that they could potentially bring to market. With the approval of the pro pinball community, Pinbox 3000 finished their Kickstarter at nearly 150% of their fundraising goal. 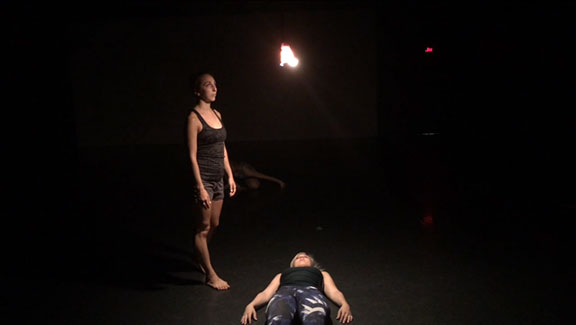 Current MFAIA-VT student Adara Meyers‘ multimedia experimental theatre company, Sleeping Weazel (with co-director Charlotte Meehan) is launching its fourth season in Boston by participating in a reading series of BODY & SOLD, a documentary play written by Deborah Fortson. BODY & SOLD is the result of interviews with young Americans from Boston, Hartford, and Minneapolis who ran away from home or were kidnapped and lured into prostitution before escaping with their lives. BODY & SOLD runs one night only, November 16, 2015 at 7:30 pm at Charlestown Working Theater, 442 Bunker Hill Street, Charlestown, MA 02129. For more information, please visit www.sleepingweazel.com.