Welcome to the inaugural post of the monthly MFA in Interdisciplinary Arts Program News Blog! We are very excited to have a regular avenue for everyone to learn about the achievements and good work of our students, alumni, and faculty.

Wendy Clark (MFAIA ’10) recently received two grants from the West Virginia Culture Commission and the Tamarack Foundation. She has gone from being in two galleries in West Virginia to being represented by 42 galleries and museums across the country, including The Fine Arts Museum of San Francisco and The Denver Art Museum as a result of this generous funding. Additionally she was selected as a 2014 NICHE Award Finalist Wearable Textile by NICHE Magazine and received the 2013 West Virginia Living Magazine‘s Made in West Virginia Award for excellence in textiles. 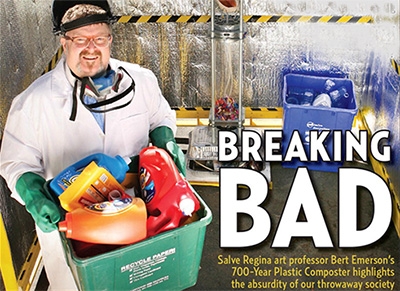 Martin Dominguez (MFAIA ’15) exhibited paintings as part of the exhibition, “Climate Change” at the E Gallery in Brooklyn, NY.

Ronni Komarov  (MFAIA ‘08) has contributed to “Al-Mutanabbi Street Starts Here,” a project inviting book artists to respond to needless violence. The project has presented exhibitions, poetry readings, and other events across the USA and in a dozen countries.

Ben Munisteri (MFAIA ’14) has been appointed Principal Visiting Choreographer-in-Residence at Lafayette College, Pennsylvania.  Along with his many obligations creating interdisciplinary partnerships and selecting visiting choreographers, the local paper comments that, “he plans to bring dance to architecture and neuro-science courses.”

Catherine Mueller’s (MFAIA ’14) article, “The Chaos and Clarity of the Orchard Project’s Core Company” was just published in Howlround, the journal of the Center for Theater Commons.

Blakeley White-McGuire’s (MFAIA ’13) article, “Re-examining the Inevitable Rise,” was published in the November issue of Performance Research: A Journal of the Performing Arts. She wishes to thank faculty member Devora Neumark, who shepherded her writing journey. Also, the November issue of Dance Magazine includes an article about the new direction of the Martha Graham Dance Company, highlighting Blakeley’s contribution as a principal dancer.

D. Sabela Grimes, presented a paper at the Critical Ethnic Studies Association as part of a session on “Decolonial Aesthetics and the Political Possibilities of Hip Hop Dance.”
He composed music for David Rousseve’s “Stardust,” performed as part of Radar LA and touring the USA in 2013-2014.

Pam Hall’s “Toward an Encyclopedia of Local Knowledge” is currently on view at the Center for Newfoundland Studies, Memorial University, St. Johns, Newfoundland.

Pete Hocking participated in “How to Survive a Plague,” a screening and panel discussion by ACTUP Rhode Island at Brown University.

Seitu Jones received two prestigious awards this year, including a 2013 Joyce Foundation Award to fund his Community Meal project, involving 2,000 participants along a half-mile thoroughfare of St. Paul, and a Camargo Foundation artist residency on the Mediterranean Coast of France.

Petra Kuppers has been named a recipient of the President’s Arts and Activism Award from the Women’s Caucus for Art. The award will be presented at the College Art Association’s 2015 Conference in New York City.

Laiwan’s work, “ETHOS: Writing with Found Objects” (1983), has been purchased by the Vancouver Art Gallery to be added to their Permanent Collection.

Lan Thao Lam’s works – “Unidentified Vietnam No. 18” and “Dark Meat or White Meat?” were screened at The Filmmakers Coop, as part of  New York Film Festival.  Her installation “Unisex” is currently on view at the NLE Curatorial Lab, New York, New York.

Devora Neumark and Unai Miquelajauregui’s 3-channel video installation Evicted was set in the storefront windows of the Goethe-Institut (Montreal). The camera lens focuses intently on the creative gestures of former tenants of the “10 Ontario” building offering a critical, yet poetic, commentary on Montreal’s inner-city “upgrading” process while considering the labor that contributed to a once-vibrant sense of community.

Rachael Van Fossen was named Co-Investigator in association with a six-year Canadian national research initiative in Art for Social Change (ASC). Funded by the Social Sciences and Humanities Research Council through its Partnership Program, “Art for Social Change: A Research Partnership in Teaching, Evaluation and Capacity-Building”, is “the first large-scale, systematic project of its kind in Canada”.  As Co-Investigator,  Rachael will  be leading a research creation field study with an ensemble of artists known as the Encounters Project.

Ruth Wallen presented a paper, “Cascading Memorials,” at the Society for Literature, Science and the Arts annual conference.