Jeffrey M. Donato (2012), illustrator and educator, was accepted for publication this year. His Tarot D: The Didactic Tarot, which was the focus of his Goddard studies, will be released in 2015. He is also currently exhibiting his recent work, Rhyme Nor Reason: A Hodge-Podge of Illustrative Whimsy, at the Science Hall Gallery of the Westmoreland County Community College in Youngwood, PA.

Mark O’Maley (2013), recently appointed Assistant Professor of Theater and Dance at Franklin Pierce University, instigated an experimental work titled, “What’s That You Tried To Say?,” a movement meditation on the shorter works of playwright Samuel Beckett. The work was created by 14 students and 13 professional movement artists from around the world on film, including performers from BLUE MAN GROUP, Martha Graham Dance Company, and Doug Elkins Dance.

Beth Nixon (2009) is enjoying a fellowship at New Urban Arts in Providence, RI that provides studio space, funding, and the opportunity to be engage a community of adult and teenage artists in inquiry about creative practice. She continues to use suitcase theater, community parades and pageants, and clown acts to build portals and give guided tours to places that don’t yet exist. More info at www.ramshackleenterprises.net.

Andrew Bonjour exhibited from his recent chapbook, From My Faith, at Franciscan University of Steubenville in Steubenville, Ohio.

Kayla Feist is exhibiting sculpture and illustrations this month in the Tribal Awakenings Show at Funky Stuff in Worcester, MA.

Maggie Keenan-Bolger is co-directing a troupe of intergenerational LGBTQ-individuals ages 18-88 in a free performance of the play, Food for Thought, as part of the project, Bridging the Gap, on December 14, 2pm at the Jefferson Market Library, 425 Avenue of the Americas in NYC. Click here for the Kickstarter link.

Ariel Luckey recently curated and hosted Thangs Taken: rethinking thanksgiving, a cultural arts event that brought artists, activists and communities together to explore the complex history of Thanksgiving and to acknowledge the legacy of U.S. colonialism and genocide against Native Americans. The event was produced by the Free Land Project and took place at the La Pena Cultural Center in Berkeley, CA.

Sandra Pfeifer recently partnered with Ms. Carole Brown to present the lecture, “Feminism and the Counter Culture Movement,” at Cornell College, Mt. Vernon, IA. The presentation was sponsored by the Women in Harlan House residence, advocates for a regional battered women’s shelter (photo below). 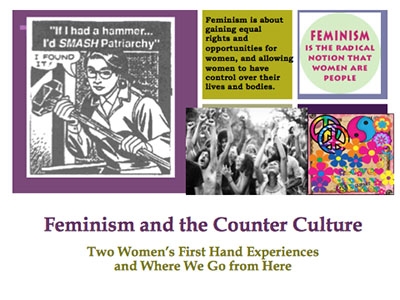 Jamie St. Louis will have an exhibit of his photographs, “50 Steps of Biddeford,” on display at the Biddeford City Hall in Biddeford, ME in January (photo below). 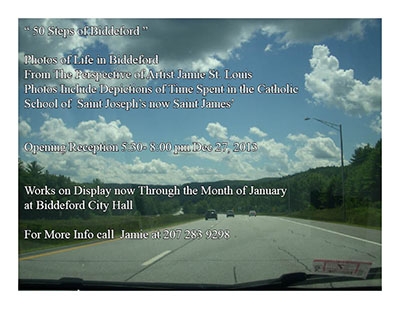 Samuel Vance is the co-creator (lyricist-composer and performer) of an original play with music, Le Club Noel, which opened November 29th at Taproot Theatre Company in Seattle, WA (photo below). Click here for more info.

Andrea Parkins is a 2013-2014 recipient of a New Works Artist Residency at Harvestworks Digital Media Arts Center in NYC, where she will complete a sound composition. More info here. 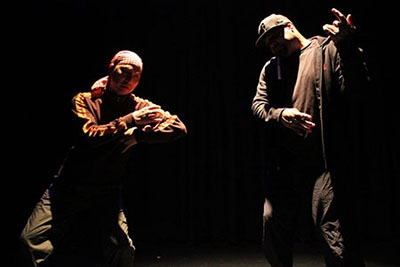 new dance theater duets in the USA, Canada, and Thailand in 2014. Flash, a butoh and hip-hop performance with acclaimed dancer-choreographer Rennie Harris, will be presented at: Brown University in Providence, RI; Vancouver International Dance Festival; University of Wisconsin, Madison; and Barnes Foundation and Painted Bride Arts Center in Philadelphia, PA. Gherm (Northern Thai for “awkwardly in-between”) is a collaboration with Thai dancer and performance artist, Waewdao Sirisook, being performed at Bangkok University and University of British Columbia in Vancouver, Canada. More info at michaelsakamoto.com.