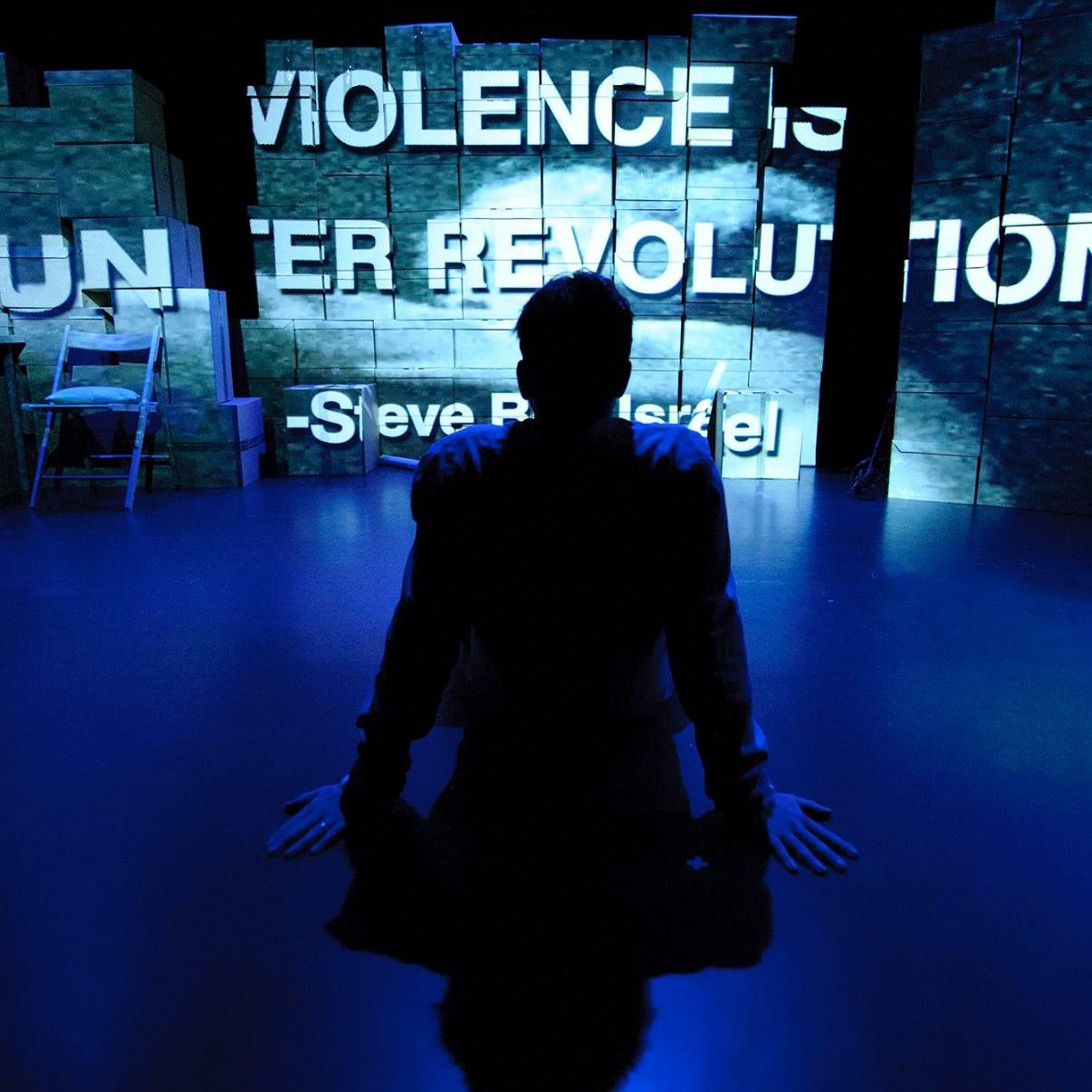 The Spinning Wheel: a Son Remixes a Father’s Radical Archive
Steve Ben Israel was a New York jazz musician, poet, stand-up comic, political activist and core member of the iconic ensemble ‘The Living Theatre’. He passed away in 2012, leaving behind a legacy of 1960s countercultural work and artifacts, an enormous archive, and a son: New York Hip Hop Theatre Artist, Baba Israel (MFAIA-VT ’08). Drawing on Steve Ben’s archival material for contextual inspiration and audio visual content, Baba has collaborated with UK Theatre Maker Leo Kay, long time musical collaborator Yako 440 Prodis (MFAIA-VT ’09), and an interdisciplinary team of artists. Together they are embarking on a new project: The Spinning Wheel is a multimedia performance and series of events that remix past and present, preserving and animating the collectivist, activist impulses of New York counterculture. The Spinning Wheel will be developed and rehearsed in December at a residency at BRIC (located in Brooklyn, NY). The final performance and related events will be presented in January 2016. The funding necessary to produce The Spinning Wheel was raised through a successful Kickstarter campaign. 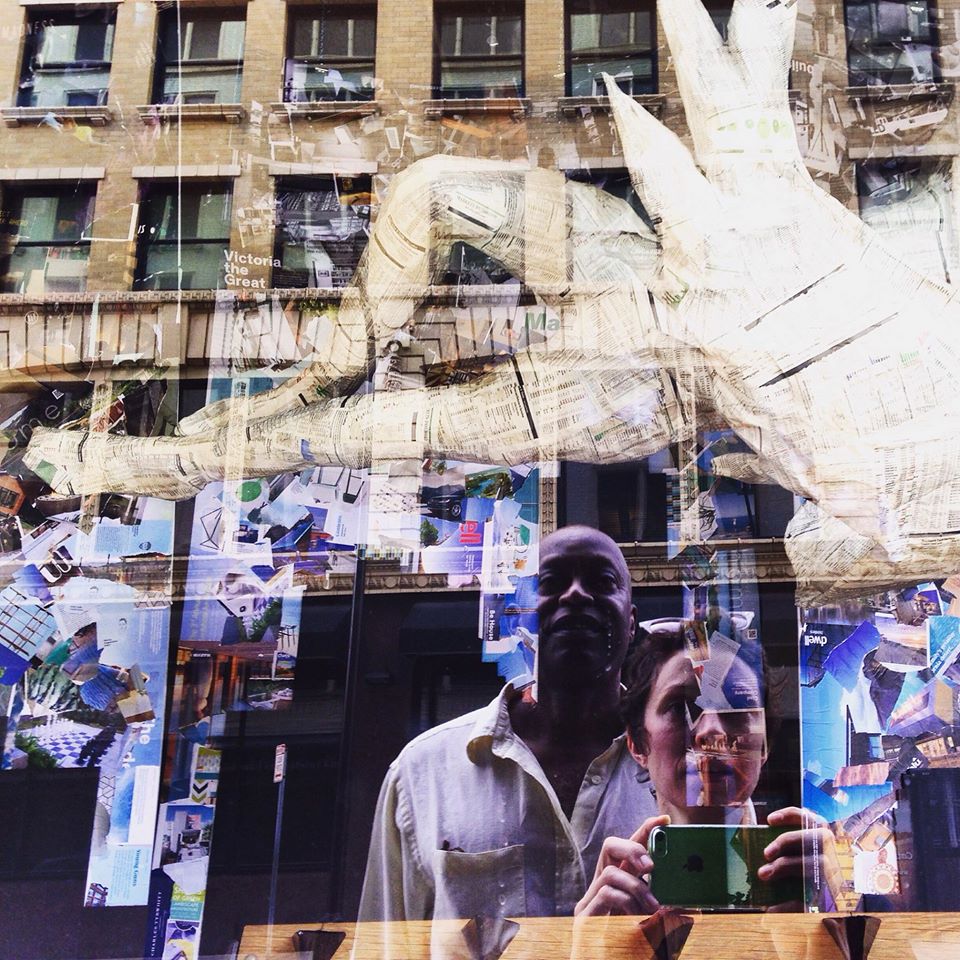 No Loitering
In collaboration with Anthony Chapin, current MFAIA-WA student Erin Lavelle created a storefront window installation for the Made Here Intersec+ions exhibition, available for viewing 24/7 through September 30,2015 at the corner of 8th and Hennepin in downtown Minneapolis. No Loitering is a commentary on the current global anti-homeless efforts – from spikes on public grounds and iron obstacles on benches that prevent people from stretching out to concrete barriers in underpasses. The installation is deliberately situated at an intersection that epitomizes the disparities amongst Minneapolitans. This sidewalk hosts folks who feast at the high-end restaurants lining the avenue and rest their bodies in multi-million dollar riverfront condos. It is also familiar to folks who call Mary’s Place – a nearby shelter – their sometimes kitchen and home. The installation features an illuminated sleeping figure, which hovers above a park bench decorated with spikes. Half-bird, half-woman, the figure is dressed in the stock pages of the Wall Street Journal. In the background is a Minneapolis skyline in silhouette with a sky that has been created from a collage of images taken from the pages of home decor magazines. 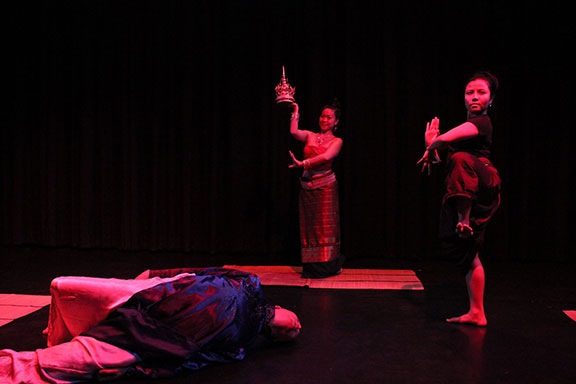 National Dance Project Grant Awarded
Along with collaborators Waewdao Sirisook, Chey Chankethya, and Nguyễn Nguyên, Michael Sakamoto – an internationally-renown dance theatre artist and past MFAIA-WA Program Director, and Faculty Advisor on leave – has been awarded a National Dance Project Grant. The grant will be used to develop a new dance theatre work called Soil in 2015-2016. Michael and his colleagues, in partnership with the University of Iowa Department of Dance, are planning to premiere the work by late next year. Stay tuned for tour dates in 2016 and beyond. 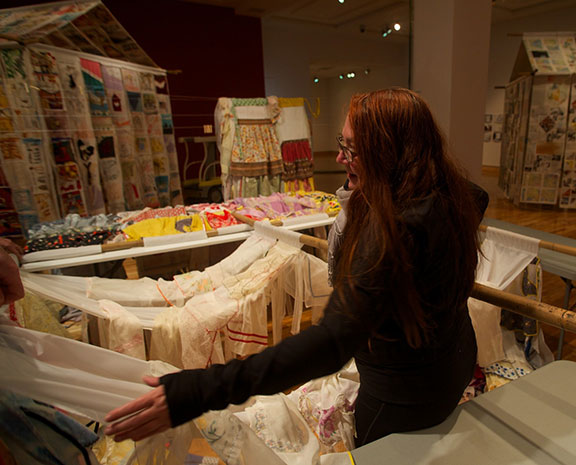 Pam Hall inducted into Hall of Honour
The Newfoundland and Labrador Arts Council Award was presented to former MFAIA-VT Faculty Advisor Pam Hall in recognition of her contribution to the artistic and cultural life of the Province. Inducted into the Fortis Hall of Honour, Hall was honoured for her work in visual arts, film, and for her longstanding contribution to the community.

Shakespeare and the Alchemy of Gender
From July 14th through the 26th Lisa Wolpe (MFAIA-VT ’07) performed her solo work Shakespeare and the Alchemy of Gender at the legendary Rose Playhouse, Bankside’s first theatre in London, UK (built in 1587). The Rose Playhouse is now an indoor archaeological site with an original repertory that included Marlowe’s Doctor Faustus, Jew of Malta and Tamburlaine the Great, Kyd’s Spanish Tragedy and Shakespeare’s Henry VI part I and Titus Andronicus. In this new piece, Wolpe explores the history of her family as she weaves personal photos and video in with passages from Hamlet, The Merchant of Venice, The Winter’s Tale, Twelfth Night, Richard III and Romeo and Juliet. Theatre artist Wolpe is best known as the Producing Artistic Director of the LA Women’s Shakespeare Company, the award-winning company that produces Shakespeare’s plays with an all-female, multiracial ensemble in Southern California. Shakespeare and the Alchemy of Gender has received a variety of rave reviews in A Younger Theatre and The Play’s The Thing UK, among others. You can also find Lisa at TransShakespeare on Facebook.

Devora Neumark’s Recent Work Featured in Quebec Arts Journal
In the latest special issue of the Quebec-based arts journal titled INTER ART ACTUEL (#120), Art Historian Suzanne Paquet featured several recent works by MFAIA Faculty Advisor Devora Neumark. Paquet’s article “At the Corner of the Street and the Web: The Question of Publics” (free translation from the original French), is part of a series of articles that focus on urban micro-interventions. The works in question include the three iterations of the live art street intervention called Faire bon ménage, which Devora performed in Amiens, France, Basel, Switzerland and Berlin, Germany this past November/December.

Kayla Jane Feist Curates Interactive Performance Arts for a Local Arts & Music Festival
During last semester, current MFAIA-VT student Kayla Jane Feist joined Fractaltribe, a community of artists, musicians and organizers dedicated to creating meaningful experiences and immersive atmospheres. Fractaltribe hosts celebrations that foster creative expressions of psychedelic music and culture. Over the past several months Kayla has been curating performance arts, fabricating costumes, choreographing and teaching an interpretive belly dance for Fractal Fest 2015. The forest festival will take place July 31st through August 2nd in Stephentown, NY. Festival organizers hope that people who attend will be inspired to integrate their experience at the festival into their everyday lives in order to create a better world for themselves and those around them. More information and tickets can be found here.

Beyond Sacred: Voices of Muslim Identity
Ryan Conarro (MFAIA-WA ’15) co-wrote the interview-based play Beyond Sacred with Ping Chong and Sara Zatz, in collaboration with the play’s participants. The piece features five young New Yorkers who identify as Muslim sharing their experiences and perspectives coming-of-age in post-9/11 America. The project is part of Ping Chong + Company’s Undesirable Elements, a program of interview-based works featuring the stories of the ‘Other’ in various communities. Beyond Sacred premiered in May 2015 at LaGuardia Performing Arts Center in Queens, NY and ran during the Lincoln Center’s Clark Theater’s summer Education Forum. The piece will also be featured in 2015-16 at Georgetown University (Washington, DC) and at other venues in New York City. A review in the NY Times is here.

ANTENNAE #32 Includes Essays by Karin Bolender and Deanna Pindell
The current issue of Antennae: A Journal of Nature in Visual Culture – devoted to ‘Multispecies Intra-Action’ – features artists investigating the intersection between Dr. Karen Barad’s theories of quantum physics, queer studies, multispecies ethnography, and post-anthropocentrism. Karin Bolender (MFAIA-VT ’07) and Deanna Pindell (MFAIA-WA ’11) both contributed essays to the issue in which they consider their artworks in a related exhibition titled Multispecies Intra-actions (Sydney, Australia, 2013). Eco-art sculptor, public artist and educator Deanna Pindell’s essay is titled: Ruminations on EcoArt: The Art of Decomposition and the Decomposition of Art. Karin’s text is titled: Gut Sounds Lullaby. The journal may be downloaded for free. 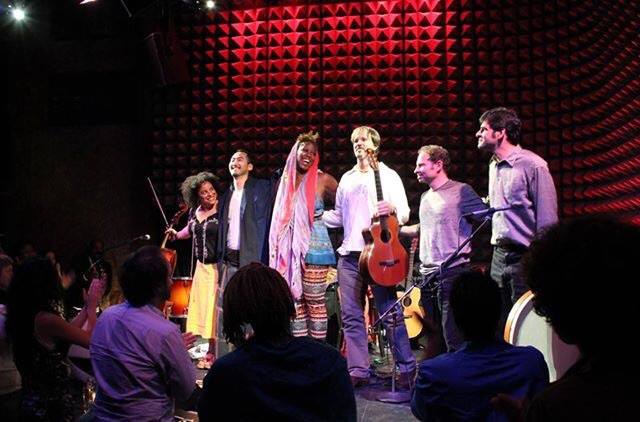 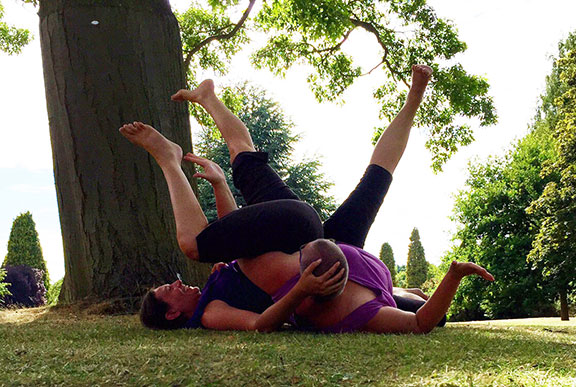 The Asylum Project
Petra Kuppers collaborated with poet/dancer Stephanie Heit and community members in a weeklong disability culture summer series. The events included performance work at Bethlem Hospital (the original Bedlam), and in the Turbine Hall of Tate Modern. Future Asylum Project workshops and talks will take place as a dance lecture at the Five Colleges Dance Departments in Massachusetts (October 2015), at a Community Dance conference in Aotearoa/New Zealand (November 2015), and at the Modern Language Association conference in Austin, Texas (January 2016).

At United Nations Global Compact Summit
Filmmaker and current MFAIA-WA student Nick Conedera was commissioned by socioeconomic theorist and leadership speaker David Cooperrider, Ph.D., to create a video explaining David’s theoretical work Appreciate Inquiry to 8000 of the world’s leading corporations from over 170 countries at this year’s United Nations Global Compact Summit. The Global Compact summit was created by former Secretary-General Kofi Annan to bring the world’s leaders together in order to create solutions to the world’s biggest problems in areas of energy, environment, economy, and government. David’s breakthrough work, “Appreciative Inquiry,” is a revolutionary strengths-based leadership change management system that brings together all stakeholders of an organization for a 3-day event to brainstorm, discuss, strategize, prototype, and test any large organization’s initiatives. Fortune 500 companies, city governments, state governments, and entire countries are currently using this management system. 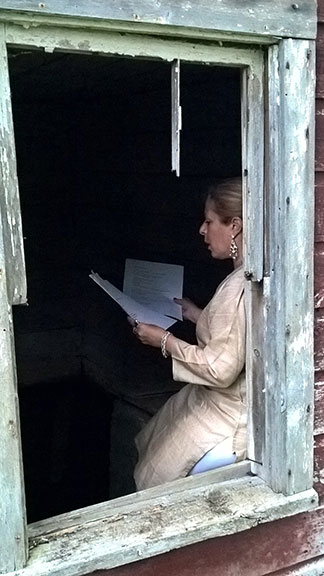 By Chance: A Meeting of Minds, Materials and Meaning
By Chance features works by Hudson Valley regional artists Lisa Breznak (MA ’93), Mimi Czajka Graminski and Riva Weinstein (MFAIA-VT ’14). The exhibition, which opened on June 21st, includes sculpture, fibre, two-dimensional, performative, site-specific, and ephemeral works drawn from nature. The exhibition, which runs through August 8, 2015, will be presented at the Seligmann Center (Sugarloaf, NY) in Kurt Seligmann’s Studio, the Robert Fagan Art Library (located on the second level of the Seligmann home), the bog garden, Arlette’s Meditation Garden, and throughout the Seligmann grounds. 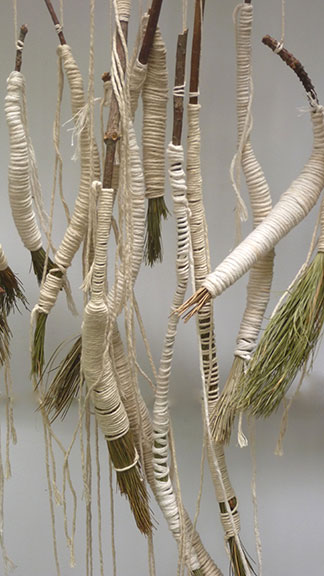 Scholar’s Lecture at George Mason University
Lynne Scott Constantine (MFAIA-VT ’14) and Suzanne Scott Constantine (MFAIA VT ’01) were invited to deliver the 2014 Women and Gender Studies Scholar’s Lecture in November 2014 at George Mason University in Fairfax, VA. In their performative lecture, entitled Epistemologies of the Studio: Artists Re-Imagining the World, each gave a short talk on her most recent work, within an overall collaborative structure that included spoken-word performance, analysis of the work of other interdisciplinary artists (including several Goddard faculty members), ideas on the role of artists’ ways of knowing in bringing about a more just and peaceful world, and a small display of objects from their studio. The Scholar’s Lecture is an annual event honouring a faculty affiliate of the Mason Women and Gender Studies Program who is making significant contributions to research and creative pursuits in her or his field. Lynne and Suzanne, who both teach at Mason, are long-time creative and life partners; they married in Burlington in 2014, on their way to Lynne’s graduation from Goddard College.

Internal Landscapes book release and workshops around the US
John Ollom (MFAIA-VT ’14) just celebrated his book release at the Bureau of General Services Queer Division. The book entitled Internal Landscapes is the culmination of nearly four years of work. The methodology described in this book refers to “archetypal movement” that can be used to make art, as well as for personal healing. John Ollom has been booking many private lessons in New York City and around the country. In September 2015 he will be leading an Internal Landscapes workshop in Tampa, Florida. All info on the book and workshops are listed here.

Grant Writer Certification
In February 2014, Paule Bézaire (MFAIA-VT ’03) received her Grant Writing Certification from the American Grant Writers’ Association. Bézaire plans to use this certification to reinforce the capacity of non-profits (and possibly artists) to find ways to support their organizations and practices. She has been volunteering for several organizations doing grant research, Letter of Intent (LOI) writing and grant proposal-writing including: Ballet Wolcott, Inner Fire, ReTribe Transformation, and the Central Vermont High School Initiative. 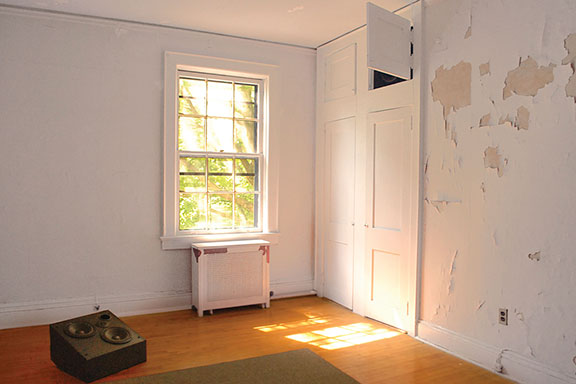 Advanced Artist Award
Lawrie Crawford (MFAIA-WA ’14) received a significant grant from the Yukon Arts Branch to research her 2017 planned installation Unravelling Complexity. The sculptural work is intended to be about relational governance. Lawrie will travel to New York and Camden in October 2015 to meet with academics and social innovators as part of this research-creation program. 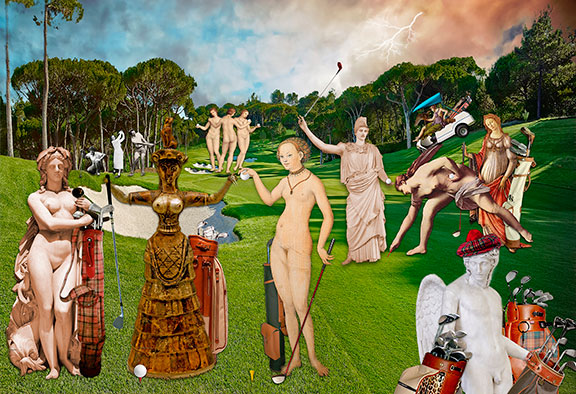 Donna Catanzaro, If Goddesses were CEO’s – the Golf Course, on exhibit at Plymouth State University.

Force of Nature Exhibit
Donna Catanzaro (MFAIA-VT ’07) is exhibiting three of her pieces in the Force of Nature: Exploring the Power of the Feminine national exhibition, which was juried by Judith Brodsky (Rutgers Institute for Women and Art, and The Feminist Art Project). The work will be on view in the Karl Drerup Art Gallery and Silver Center for the Arts, Plymouth State University, Plymouth NH from July 9 through August 14, 2015.