This blog post was originally printed in The Rutland Herald on August 5, 2014. Reprinted here with permission. 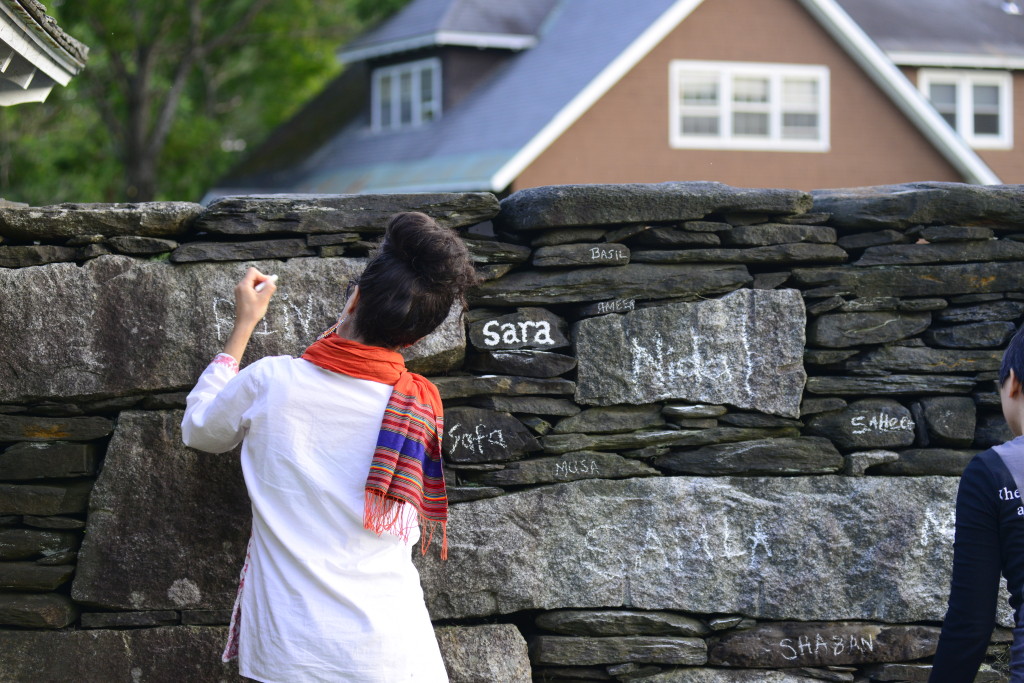 It wasn’t all what they planned, but sometimes events demand art and action of the most immediate kind, with little planning.

At least, that was the view of a small group of artists in Goddard College’s MFA in Interdisciplinary Arts residency that ended up putting together a moving, interactive display on Goddard’s Plainfield campus Wednesday to reflect on the tragedy unfolding in the current Gaza conflict.

Part of the Gaza display will remain for some time, if rains don’t wash it away.

The idea for the Gaza Memorial Wall art installation came in a lunch meeting between MFAIA students and faculty earlier in the week as they brainstormed about what art installation they could contribute to the college’s larger “Art Crawl” that would add to the conversation on campus about the tragedy unfolding daily in Gaza.

Students Suchi Branfman, Donia Salem and Mary Munson, together with Goddard faculty member Gale Jackson, decided they could utilize the stone wall surrounding the college’s maze garden as a memorial wall to honor the civilian victims of the conflict and recognize the separation between Palestinians and Israelis that has led to so much death and deprivation.

“Goddard has a tradition of social causes, using art as an archive medium, and in raising community awareness,” said Salem, “so we thought we could do something along those lines. Ultimately, we felt there should not be any silence about what was happening in Gaza.”

New Jersey artist Donia Salem, a dancer, choreographer and poet whose father is Egyptian, downloaded a graphical list of the Gaza civilian victims published online by the London Telegraph so that participants in the art installation could write victims’ names in chalk on the stone wall surrounding the college’s gardens, which would also represent the physical wall constructed by Israel that now separates Gaza and Israel. She also prepared a traditional Middle Eastern and Mediterranean dish, zaatar, with bread, olive oil, and spices, a food staple of the region.

California artist Branfman, also a choreographer, dancer and longtime activist and educator, rehearsed a dance piece entitled “Journey” about witnessing and finding one’s voice. Connecticut educator and artist Mary Munson proposed laying stones around the Arabic word Saleem traced in chalk as part of the display to mirror a burial tradition and to signify the permanence of death for the Gaza victims and at the same time, the hope for peace.

In the Gaza Wall Memorial presentation Wednesday, dozens gathered quietly around the stone wall as candles were lit, Branfman danced, and readings were offered by Munson and faculty member JuPong Lin. The list of Gaza victims, at the time about 180, was laid out on a simple table along with the zaatar. Many of those watching soon stepped forward and began writing the names of victims in chalk on the wall. Some shed tears as they wrote in chalk or as they placed small round stones on the top surface of the wall.

“Their attention was drawn to it and there was a somber mood,” said Munson. “The results were amazing.”

“There were many that were clearly deeply moved,” said Salem.

“I was very happy, and truly inspired by people’s response to the installation,” said Branfman. “People were part of the experience. It’s often the most powerful when observer becomes participant.”

As of Friday, major international news organizations were reporting the death toll in Gaza had exceeded 1,650 with 63 Israeli soldiers and 3 Israeli civilians killed, according to figures provided by the respective sides in the conflict. The UN estimated 80 percent of the Palestinians killed are civilians.

“Paying tribute to the Gaza civilians killed is important as they are the ones suffering the greatest” said Salem. “There is a striking disproportionate nature to the conflict.”

Preparing Sunday to fly back to her home in Santa Monica, Branfman said she had gotten word that some of her friends at the California College of the Arts in Oakland are now talking about doing their own Gaza Wall Memorial, possibly on the wall surrounding a local school in Oakland.

Munson said Sunday she and Salem are talking about doing another wall somewhere in the Northeast between their homes in Connecticut and New Jersey.

“It would be cool if this was something that spread and was done elsewhere,” said Branfam, “though, in a way, it would be unfortunate. I’d rather the conflict ended.”