Between our challenging spaces of academic “doing” over the summer months, there is also the need for periods of renewal, that allow us to experience the season’s measured plodding and time to contemplate how our studies, practices and social commitments might be deepened and refueled. 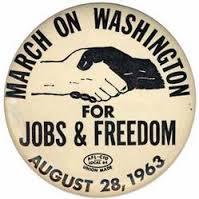 One of the events that I expect to participate in this month, is the 50th Anniversary of the March on Washington. In recognition of the historic occasion, the United Auto Workers (UAW), is organizing a massive gathering on Saturday, August 24th, and the official event will take place in Washingon, D.C. on Wednesday, August 28th.

From toddlers to elders, we are all familiar with the basic urgings of Dr. King’s celebrated speech, “I Have a Dream.” More a fiery homily, it serves as an indelible marker of the call to action on behalf of the poor, jobless, imprisoned and racially discriminated, in 1963. When examined in its entirety, King’s speech remains vital to discussions on 21st Century social strife and is a powerful gateway to critical race theory, cultural studies, queer theory, and the larger social, political, and economic movements, that continue to demand our responsiveness.

For further information on the Marches:

Please look for further installments on this topic by two Undergraduate Program students, Brandilea Harris and Suzahn Ebrahimian, who offer stirring examples of how packet work can be a “studied” reflection of one’s life work.

Conversations with the Coast by student Brandilea Harris

Recently transplanted to Brooklyn, Brandilea was born in the southern Louisiana Gulf coast region, though relocated in her teen years. She returned to the region a few years ago and this semester, launched a major eco-ethnographic study that visually explores the environmental and cultural elements that have defined an endangered part of this country’s geography for most of us, only since the tragic events surrounding the Katrina floods. Of her project, Conversations with the Coast, Brandilea writes,“It is a farewell, in a deeper sense too, an epilogue, for the rapidly disappearing coastline of south Louisiana.” Read her entire essay in the enclosed pdf link.