Maryanne Bartzen-Murray (IBA ‘12) is graduating this spring from the New School University in New York with an MA in Media Studies and Media Management. Maryanne got married in March 2013.

Ryan Brown (IBA ‘12) accepted a job with the National ACLU to serve as the Marriage Campaign Strategist. He will be advising ACLU affiliates across the country as they begin working to advance marriage equality efforts in their states. Having worked on the marriage equality movement for the last eight years in MA, NH, VT, RI, ME, and OR. Ryan continues to be based in Portland, OR.

DANCE MONKS
Site-specific Interdisciplinary Performance of
NOMAD: The Blue Road
along the path of Strawberry Creek, Berkeley, California
May 17 & 18, 2014 at 11 am

On May 17 & 18 DANCE MONKS will collaborate with renowned interdisciplinary artists on a site-specific, interdisciplinary performance to honor water, following the (now mostly underground) path of Strawberry Creek in Berkeley. The guided walk begins at the base of UC Berkeley campus (Center/Oxford Street entrance), passes through Center Street and ends at Strawberry Creek Park with live performances on sites along the way. NOMAD: The Blue Road invites the audience to walk in remembrance of our often forgotten, vital relationship to water. The work is inspired by sites along Strawberry Creek as well as ancestral memories in relationship to place, ancient legends and water deities. For more information: http://www.dancemonks.com/

Lauren Russell (IBA ’11) is completing her MFA in Creative Writing at the University Pittsburgh. In 2012, Lauren published, Dream-Clung, Gone (Brooklyn Arts Press), which includes many of the poems she wrote for her senior study. Read more news from Lauren. 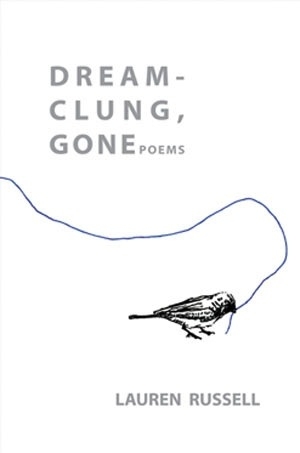 Jonathan Smucker (IBA’ 12) is pursuing a PhD in Sociology at the University of California-Berkeley. Jonathan focuses on political sociology, social movements, culture, and social psychology. Jonathan was awarded an NSF Graduate Research Fellowship-Honorable Mention. He recently published, “Occupy: A Name Fixed to a Flashpoint.” The Sociological Quarterly 54(2): 219-225.

Mariah Coz (BAS ‘14) continues to live in in a renovated 1960s off-grid trailer that she named “The COMET” (Cost-effective, Off-grid Mobile Eco Trailer) and is giving an e-course on “Tiny Transition and Downsizing.” Read more on her wonderful blog. 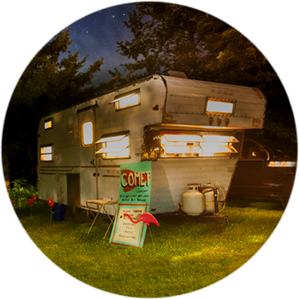 Olli Johnson (IBA ’14) took a leave from Goddard in Fall 2013 to accept a funded artist-in-residence position with In The Heart of the Beast’s Puppet Lab in Minneapolis. As part of the residency, Olli developed and performed her piece, “Moonstruck: An Improbable Romance” in February/March 2014. Olli will be back at Goddard in Spring 2014. 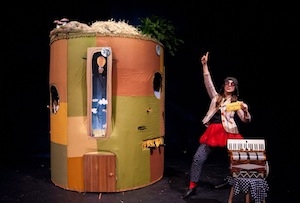 Marita Kennedy-Castro (BA HAS ’14) is organizing and performing in Bakunda (We Love), A Night of Multi-Cultural Dance, Rhythmic Music and Spoken Word in Portland, Maine, as part of her senior study. The public is invited to attend on April 19, 2014.

Bakunda (We Love):
A Night of Multi-Cultural Dance, Rhythmic Music and Spoken Word 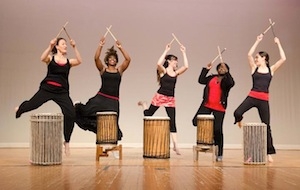 Bringing together Flamenco, B’Inganzo, West African, Contemporary, Step Dance and Spoken Word with artists from Olas Music & Dance, Abeza B’inganzo,
Blue Moon Tribe, The Telling Room and more.
Bakunda (We Love) highlights resilience & interconnection
with one another and with the rest of the natural world
Join us for this special one-time event!

The 2014 Goddard Wellness Fair will take place on Friday, August 22, just after the residency begins. Goddard faculty, staff, students and Vermont community members will be able to get mini-treatments and learn more about alternative healthcare. Topics will include yoga, pilates, how to read food labels, and herbal remedies, to name just a few. Weather permitting, the 2014 Goddard Wellness Fair will take place indoors and outdoors. A pamphlet with all of the offe
rings and participating practitioners will be available at the Help Desk the week prior to the residency. For more information, please contact Juanita.Martin@goddard.edu or Emily.Opperman@goddard.edu

Molly Riverstone (IBA ’15) had an exhibition of her paintings at The Boiler Room in Port Townsend, Washington, in Fall 2013. Molly completed these paintings as part of her Goddard studies. 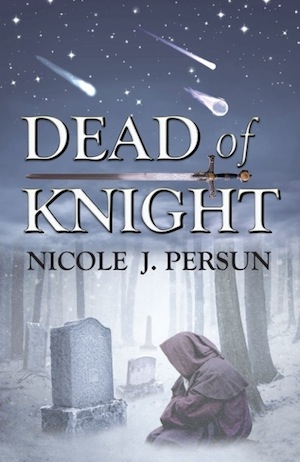 In September 2013, the Seattleite published an article about Nicole and her father:
And in October, Nicole taught at the Whidbey Island Writers’ Conference–the highlight being a half-day young writers’ seminar, which Nicole also helped organize.

Cynthia Tina (BAS ‘15) is the recipient of Goddard’s 2014 Sustainability Entrepreneurs Grant. Cynthia’s focus is ecovillages, and she will use the grant to develop the Sustainability Educators’ Program at NextGEN (Next Global Ecovillage Network), where Cynthia serves as Executive Director. One of NextGEN’s aims is to train young people to host educational events and teach the social, economic, environmental, and cultural dimensions of communal regenerative living. Read more about Cynthia’s work here.

Annie Abdalla has a solo exhibition, “Mapping My Roots: Borders and Hidden Territories” at the Musée Beaulne 96 Rue de l’Union Coaticook, Quebec, from March 23 to May 4, 2014. Annie was awarded a Creation Grant from Arts Nova Scotia and was Artist in Residence in Coaticook, Quebec, in 2013. 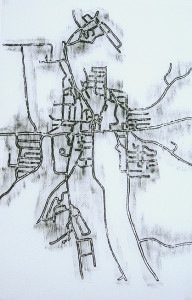 Phyllis C. Brown was nominated to the Board of the Friends for the North Sarasota Library.

Bobby Buchanan is a 2014 UVM Fellow in Sustainability. Bobby recently presented,  “Sustainable Culture, Community and Learning in the Green Mountain State: Leadership for the Nation?” at the Sterling College Cultural Sustainability Symposium.

Karen Campbell participated in Hirakiza Open Theater performances/presentations around Japan. These performances address social issues, including discrimination against ethnic and other minorities and people with disabilities. The Theater also takes a stand against nuclear power and recognizes those displaced by the 3/11 earthquake and tsunami. Karen attended the 9th International Conference on Environmental, Cultural, Economic and Social Sustainability, Hiroshima, Japan. With Goddard MA in Individualized Studies Faculty Katt Lissard, Karen presented, “The Low-Residency Model and the Radical Edge: From Personal Theory to Engaged Work in the World” at the NEA Higher Education Conference, “Raise Your Voice: Activist Scholarship, Social Change and the Future of Higher Education,” St. Louis, Missouri, March 13-17, 2014.

Neema Caughran is the elected representative from Southern Colorado for Together Colorado, a statewide organization of PICO International, a social justice organization for faith leaders. Neema was also chosen as Featured Artist for her sculptural work at the Cup and Bowl Clay Gallery in Pueblo, Colorado. 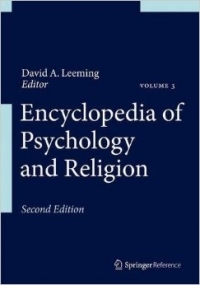 Bethe Hagens was re-elected to the Executive Board of the American Anthropological Association’s Society for the Anthropology of Consciousness. In October 2013, Bethe gave a presentation, “The Sensory Integral Vortex of Bullroarers” at the 45th Annual Meeting of the International Jean Gebser Society in Los Angeles at the University of Philosophical Research.

Ralph H. Lutts is a member of the Board of Directors Executive Committee and Chair of the Program Committee of Blue Ridge Heritage (BRH), a nonprofit organization in Virginia. Presently a volunteer effort, BRH is using $1.2 million in federal and state seed funds to develop a visitor center, economic enhancement, and education project in southwestern Virginia. The BRH’s place-based program is largely of Ralph’s design.

Shaka McGlotten received a 2013-2014 Alexander von Humboldt Fellowship in Berlin. Shaka’s book, Virtual Intimacies: Media, Affect, and Queer Sociality, was published in December 2013 and comes out in paperback this summer. Shaka just sent a new book, Necrosexuality: Zombie Sex, which he co-edited, off to press. 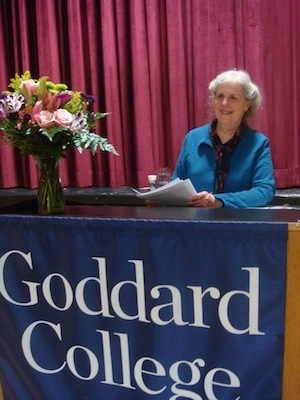 to trail behind a reading from Boulderpavement on Vimeo.

Eva Swidler gave a paper at the American Historical Association annual meeting in January 2014 in Washington, D.C. The paper was a shortened version of an article she has written, “Ignorance Is Bliss: Why Unlearning History Is So Hard, and So Important,” forthcoming in the journal World History Connected.  Eva and MFA-W Faculty Jan Clausen published an article, “Freedom From Below: Toward an Adjunct-Centered Struggle,” in the Journal of Academic Freedom.

Diana Waters presented at a storytelling event at the Washington County League of Women Voters in Hagerstown, Maryland, in March 2014. Diana shared a story that she originally wrote as a student for her Goddard Senior Study and also used as an epilogue for her dissertation, “Storytelling and Narrative: School as a Site of Resistance and Production.” Diana writes, “The story is told from my eight-year-old self about the ways that my mother advocated for us and all public school children in the face of hostility and adversity from racist, sexist and class biased hegemony of the institutions that we regularly negotiated.” Diana is presenting a two-part workshop at the Spring 2014 Undergraduate Program residency option 2 on “Storytelling and Narrative: Epistemology, Social Production, and Resistance.”

Karen Werner’s chapter, “Performing Economies of Care,” is included in the book Performing Diverse Economies, edited by Gerda Roelvink, Kevin St. Martin, and J.K. Gibson-Graham, forthcoming from the University of Minnesota Press. Karen presented her audio documentary, “Laws of Lost and Found Objects,” as part of the series, “Writers on Writing,” at Smith College, Northampton, Massachusetts, in January 2014. Listen to Karen, along with Faculty Eva Swidler, on WGDR’s Goddard Hour.

Herukhuti Williams joined 30 leaders from the bisexual community at the first-ever White House roundtable discussion on Bisexuality in Washington, D.C. in September 2013.  Herukhuti was a speaker at the Bisexual/Pansexual/Fluid Organizing Institute, a day-long institute at the Creating Change annual conference in Houston TX in Jan./Feb. 2014.

He also recently participated in a program meeting on bisexual issues and media representation at GLAAD. Herukhuti has been accepted into the 2014 NEH Summer Institute, “Black Aesthetics and African Centered Cultural Expressions: Sacred Systems in the Nexus Between Cultural Studies, Religion and Philosophy” at Emory University.