In 1973, when I first arrived at Goddard, there were already a few student published periodicals.  One was called simply “The Paper,” and came out on newsprint.  Some time later, a group of students published “The Pig Farmers’ Almanac,” which was more of an occasional vehicle for stories, poetry, drawings, photographs, and humor.  It was staple bound, more like a magazine.
The Spring of 1975 was to be my last trimester – I was due to graduate that May.  However, my original idea for a senior study, involving extensive video production, soon became unworkable.  Part of the reason was the fact that Goddard was shrinking and cutting budgets, so the one faculty person for video, Kirk Gardner, had been laid off by the time I got underway.  The other reason was that my concept was way too ambitious for one student (me) to accomplish in a single trimester.  So, by that March, I was left without a senior study plan.  I had to start over.
I was interested in the study of media, and by then I felt that communication on campus was lacking in a number of ways.  I imagined starting a student ‘information office’ to help coordinate on-campus information for students and faculty alike.  (My senior study book contains a detailed description of what I had in mind; it’s in the archives for December 1975, the official date of my graduation.)  In a number of ways, my plans were again overly ambitious, but right away one thing stood out.  There was a bumper crop of events on campus, right at that time.
Goddard was in the middle of making a transition from a trimester to a semester academic calendar.  Our trimesters had been the same length that traditional semesters were (about 3 and 1/2 months long), but we had a third term in the summer as well.  So you could go to college year-round, if you wanted, and get credit for three terms in one year.  Or you could take a vacation in the winter term if you preferred, perhaps to go skiing instead of heading to the beach.  Then, you could go to classes in the summer instead.  It was a very flexible schedule.  The key was that you needed 9 trimesters to graduate.
But by the end of 1974, the faculty and staff had decided to go back to a more traditional schedule – two semesters with the summer reserved for a special optional summer program.  From then on, you’d need only 8 semesters to graduate.  The result was that, by May of 1975, we were about to have a group of 9th trimester people and another group of 8th semester people, all ready to graduate at the same time!
This meant that there were twice as many people doing senior studies as usual that spring.  Since many students worked in the arts, there were double the number of displays of pottery, blown glass, metal sculpture, fiber arts, paintings, prints, dance performances, plays, videos, talks, readings, radio specials on WGDR, and so on.  Everywhere you looked on campus, there were posters heralding all these events!  It was somewhat overwhelming.
I started to realize that if I didn’t keep better track, I was likely to miss events or shows being mounted by good friends of mine.  I wasn’t carrying an appointment book with me in those days, and there were no web pages, smart phones, ‘personal digital assistants’ or Email either.  In fact, there weren’t even any personal computers yet (the first personal computer kit was introduced that very year – the one Bill Gates wrote his first BASIC language compiler on!).  Thus, all communication was on paper, or by word of mouth.  The one exception was a phone line that reached a recorded message from the ‘student activities office.’  The staffer who made the recordings had trouble keeping it up to date, of course. Most students were too busy to call it up and then sit and take notes while listening to the entire list.  There were a few announcements on WGDR, of course, but most air time was devoted to other programming.
So I had an idea.  I would put out a single mimeographed sheet every morning with events taking place that day, and events for the next day listed on the back.  I decided to call it the “Blue Rooster” because you’d wake up with it in the morning, at sunrise (when the rooster crows), and I planned to print it on pastel blue paper. 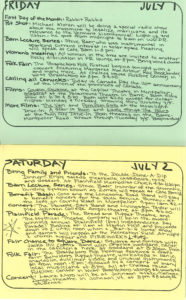 I started by carrying a small pack of index cards in my shirt pocket, along with a pen.  Each time I saw a poster I hadn’t seen before, I’d write down the particulars – the date, the time, the location, and what was going on.  Later in the afternoon, I’d sit down and sort out all the cards.  Then, I went down to the housing office in “A” basement (on Northwood, where I lived), and ask to use one of the typewriters.  I put in a stencil and started typing out the events for the next day.  Then I’d run down to office services on Greatwood (located below the Haybarn), and run off a few hundred copies on the mimeograph machine they had there.  (In those days, mimeograph copies were much cheaper than Xeroxing.)  Then, I’d drop off a bunch in each dorm and hand them out in person to people I passed by on the paths.
I published the first one on Wednesday, the 25th of April, 1975.  Already, by then, I realized that I couldn’t do it every day, so I decided to publish on a Monday, Wednesday, Friday schedule.  That Friday, when I phoned the staff at office services to say I was coming over to print the next edition, they told me they had run out of blue paper.  What other colors did they have?  The woman started listing off the names, “Goldenrod, raspberry, canary yellow…” At that moment, I decided to call the second edition “The Canary,” and print on that color.  From then on, I chose different colors for each one, and changed the names to something appropriate.


Well, it was a big hit!  People would approach me wherever I went and say, “Oh, I have something for your next … um, your newsletter thing.”  So, I would pull out another index card and take down the information.
From the beginning, I also included other meetings as well as various miscellany, such as the deadline for returning books to the library at the end of the term, when audio tapes & equipment were due back to the Learning Aids Center, and so on.
It was not only a successful publication on campus, it was a personal success for me!  Now, I was able to make it to almost all the shows and events put on by friends of mine who were about to graduate!
During this time, I was also working on other projects under my ‘information office’ idea.  By the end of the term, I was exhausted.  I met with my senior study committee and we all agreed that I should write up the theory behind the various projects I had been doing.  But there was no time left in the term to do that!  So my graduation had to be postponed.  I attended graduation ceremonies that May and watched as most of my friends got their degrees.  Then, I went off to find a place to live, get a job, and start writing.
I thought that would be the end of the Rooster.  After all, I had finished my last trimester on campus.  Who would do what I had been doing?  Fortunately, another student contacted me that fall and asked if he could use the Rooster name and continue publishing.  He wouldn’t keep up the schedule I had, but I said go for it!  So he started his own version of the Rooster and it lived on beyond my time on campus.

Glenn C. Koenig received his BA degree from Goddard that December.  He refers to himself as a self-employed “generalist,” making a living from database design work, video production, and writing. His forthcoming book is titled “A Man Wearing a Dress.”