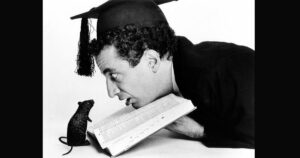 A Closer Zoom on Paul Zaloom

Paul Zaloom graduated from Goddard College in 1973. His degree, he says, was in puppetry, though he had no professors who taught him that specific subject. So how did he do it?  OPENING ACT Zaloom, like many Goddard graduates, followed the progressive education model to “learn by doing”. It began when he joined up with […]