A few blocks from where I now live, on a late summer afternoon, I stopped in my tracks and stared at the sidewalk for some time. I was an undergraduate art student, probably 19 years old, and particularly vexed by the opaque and impenetrable rationale of the art school curriculum I was enduring. Somehow, in my furious walk from campus toward my apartment, for the first time I articulated a question that would become a central concern of my career: how do we learn anything?

The question stayed with me and pushed me in new directions. I quickly took a series of courses on pedagogy, learned how to teach English to political refugees, undertook an artist residency at the Rhode Island School for the Deaf and, as I graduated, accepted an internship at Brown University’s Center for Public Service.  That internship would eventually lead to me become the Center’s director for thirteen years, opening me to many perspectives on learning and teaching. However, one experience enabled by the Center—attending an intensive workshop at the Highlander Research and Education Center—was decisive.

Perhaps best known as the place where Rosa Parks prepared for her act of civil disobedience, it was at Highlander—and through the shared wisdom of the many activists who spent time there—that I started to see how all learning is contingent and contextual. In particular, I learned directly from leaders in Appalachian communities—all but abandoned by their state and counties, and devastated by the business practices of mining concerns—who, by building local educational opportunities, were succeeding in enabling high school graduation and college enrollment for the first time in twenty-five years.

Others shared with me how they were slowly learning to build local economy, after realizing that their concerns would not be addressed by luring new corporations to replace the mines. Each of those I met told me a story of transformation that emerged from their individual learning; which only emerged when they started to value the specificity of their lives and communities. Highlander helped me see how transformational learning begins when people articulate their concerns, and then radiates outward to critically engage with the ideas and experience of others. Importantly, I learned that transformational learning is anchored to one’s real context and situations, and is often derailed by the authoritative expertise and directives of well-intentioned educators.

We learn and we change when we understand why we’re learning, when we take charge of our learning, and when learning matters.

As a teacher of college students, I was interested in thinking about how this approach might be enacted in post-secondary contexts, and I was particularly interested in considering the effect of these ideas upon the arts. I started to read widely—returning with fresh eyes and greater experiential depth to authors I’d first met in college, like John Dewey, Paulo Freire, and bell hooks. I found Martin Duberman’s landmark history of Black Mountain College to hold particularly captivating examples of how Progressive theories of learning worked (and didn’t work) in both higher education and in the arts. As I began to consider graduate school, I started to search for schools like Black Mountain, and eventually stumbled across Goddard. 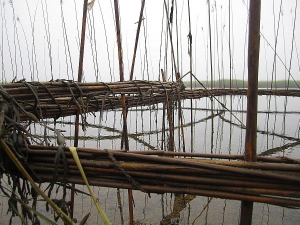 When I first arrived as a student in the MFA in Interdisciplinary Arts program, I felt like a spy. In some ways less interested with the content of an MFA degree than I was with the program’s commitment to Progressive pedagogy, I was intently curious about the structure and process of the learning experience. No doubt to the annoyance of some of my advisors, I looked for places of both consilience and dissonance. Where did a theory of Progressive pedagogy truly embody itself in the process? Where did the exigencies and ideological aspirations of traditional schools and teaching, such as understanding particular, canonical bodies of knowledge, impede or contradict claims of Progressive intention? How well were my advisors holding in check their own ideologies, expertise, and authority while witnessing my concerns and acknowledging my experiential context as the starting point of my learning?

The answers to my questions aren’t easy or clear cut; and they are the questions with which I continue to wrestle teaching at Goddard today.

Any educational institution, no matter how radically it puts the learner in the center of the learning process, lives within a context; and graduate education especially lives within the ideologies of its disciplines and practitioners. And, because it often feels easier to give an obvious answer, it takes enormous discipline on the part of any educator to hold space for learners to discover both the brilliance and the folly of their inquiries. On balance, Goddard held a space for both my questions and for my context, and I learned more than I believe I would have elsewhere. But, as with many things in life, the work is unfinished.

It’s tempting to think of the space that Goddard held for my learning as a place of balance, but in practice it’s more like continuously weaving one’s questions with those things others already have discovered. And the transformational outcome isn’t mastery of particular bodies of knowledge, but the cultivation of one’s ability to meaningfully engage with ideas, to draw meaning from one’s experience, and to thoughtfully stand one’s ground. Perhaps most importantly, Progressive Education emphasizes the imperative to apply thinking to action, and to undertake one’s learning always with an eye to how one’s discoveries will matter in the world. In this way, it prepares learners for the variety of questions and inquiries they may encounter, as well as cultivating the skills for what used to be called citizenship, but we might today think of as engaged democracy. This is especially vital in the arts because the arts are most effective when they advance our imaginative potential. And democracy fails when we can’t imagine the next possibility for human freedom.

In my own education I needed teachers who could witness me, and who might help me discern the inquiries that could be transformational to my ways of seeing, knowing and being. I needed not only to have my experience witnessed, but also to be invited to imagine the next iterations of my life. I needed someone to hold a space in which I might imagine my full potential and my best self. Among the students with whom I work, I often find a similar set of needs.

Undertaking this kind of educational work isn’t easy for people on either side of the dialectic, but it is a way of teaching and learning to which Goddard allows me to aspire. If my language here seems tentative, it’s because I don’t believe that one can ever fully master this mode of teaching (or learning). My own growth as a teacher is spurred by every new encounter with a learner.  Goddard’s pedagogical approach allows me to embrace an uncomfortable kind of humility; one that acknowledges I’ll never be prepared to be every student’s best teacher, while still holding the obligation to do the work of becoming the best teacher possible for every learner I meet.

I’m uneasy claiming that the pedagogy I describe is in any way special. I would prefer to think that it’s simply good teaching. Yet, given the increasingly parochial aims of American education, Goddard’s approach is as radical today as when John Dewey first articulated his version of it a century ago. In an era when education is largely tethered to the economy, many learners have accepted education as something instrumental. Tragically, it’s instrumentalized them, too. Instead of embracing education as a means of advancing the potential and significance of our lives, we’ve been trained to think of it as a way to get a foothold in an economy that’s both alien and disconnected from our self-interest. Against this bleak landscape, Progressive Education holds a promise of meaning.

The privilege of teaching at Goddard lies in trying to meet that promise.