Residencies are an intense opportunity to immerse in graduate study away from many of the distractions of daily life.  Not only is the residency a time to set the groundwork for the semester’s work–writing your study plan and developing a relationship with your advisor and advising group–but the residency is also an occasion to engage with the Goddard community and stretch creatively and intellectually.

The residency theme, guest artists, and faculty and student workshops offer an array of lenses to engage in issues, trends and processes in contemporary artistic practice.  Engaging in conversation around your creative work is also an important part of the residency.  Each residency offers numerous opportunities for sharing creative practice, from advising groups, to considered spaces, where students share in-process or completed work, to community-wide events including a video/film festival and Cabaret, an informal showcase for short performance work on the final night of the residency.  Although a residency lasts only eight days, the dialogues initiated and relationships formed continue to grow throughout the semester and beyond.

One of the highlights of the MFA in Interdisciplinary Arts (MFAIA) program residency is Art Crawl.  This celebration of art work was initiated by students three years ago as an opportunity to share work, receive critical feedback, and, as student organizer Amanda Hancock says, “In true Goddard fashion, we MUST have fun.”

As I began to make my way through last summer’s Art Crawl, looking at the crowded map and trying to decide where to go next, I stopped to grab my camera.  What better way than pictures to share a sense of the creative energy generated during a residency? 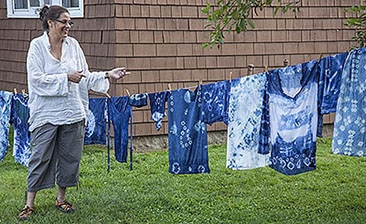 Preparations for indigo pot dying began the night before, when participants wrapped, tied, and bound their fabrics creating voids to resist the dye.  Early Wednesday morning student Chriztine Foltz (MFAIA ’14) supplied indigo dye pots for everyone to dye the clothing they had brought. Participants dipped their bundles up to five times to obtain rich hues of indigo.  In the afternoon the bundles were washed out and the resist materials removed, revealing delightful and unexpected results.

Just down the path, dancers and musicians provided an improvisational performance. 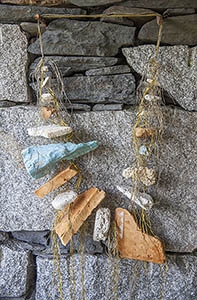 Art work was hanging everywhere. Riva Weinstein‘s Montauk Styrofoam Necklace was created from found Styrofoam, raffia, copper and silk. Riva writes about her work, “Beach refuse becomes metaphorical adornment in a vacation memento. What if all refuse were treated this way, transformed rather than discarded? ”

Earlier in the week student Cecilia Marshall led a workshop where participants created a cooperative book.  Each participant wrote about a personal myth, shared the results with a partner, and depicted the story on a piece of cardstock.  These were then assembled into the large “flagbook” on the table.  Shown here are also several of Cecilia’s artist books. 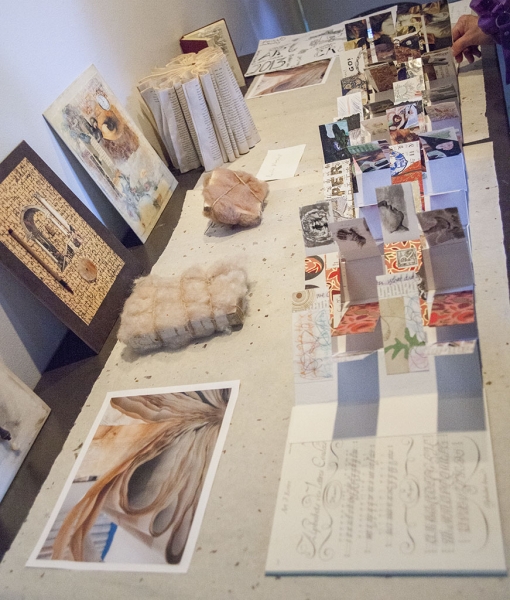 Walking up to the Garden House, I encountered dancers engaging with Willi Singleton‘s installation, “”Ding an Sich” of his natural ash glazed stoneware. 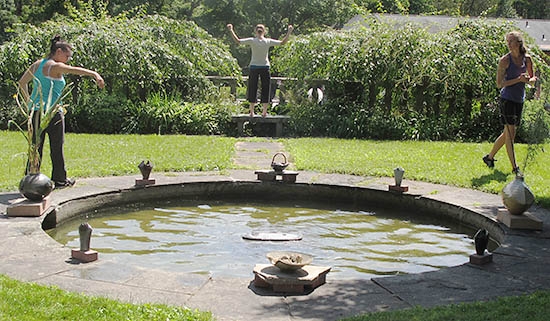 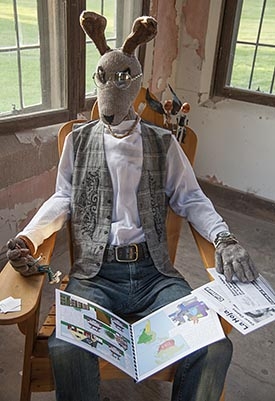 Inside I found Martin Dominguez’s life-size sculpture, Hamilton. He is reading Martin’s graphic narrative, Don’t Judge a Book by its Cover.  This true story details the changes in Martin’s perspective as he immigrates from Uruguay to the US. La Hoja, on the arm of the chair, is a monthly newsletter than Martin designs for Poryecto de Liderazgo Comunitario, an organization that Martin co-directs with Enrique Murillo.

Below is a photo of The Science of Loneliness, with Maggie Keenan-Bolger and Ben Munisteri.  Ben writes about this work: “I was looking to contrast a growing, lush, outdoor environment with an emblem of humans’ self-imposed isolation and disconnectedness. There are implicit contradictions in this picture, however: humans do connect over telecommunications technology, after all….Also, the bird calls viewers hear are not live emanations from actual birds in the trees: the sounds come from a digital recording, played softly from a laptop discreetly placed at the side of the tennis court. The performers enter the tennis court but stop suddenly: They are completely still for five minutes, cued to walk again by an iPhone alarm set to the sound of crickets chirping.” 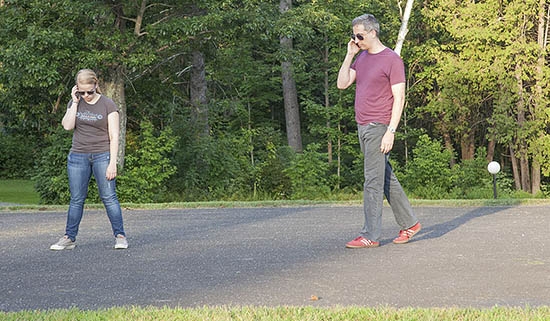 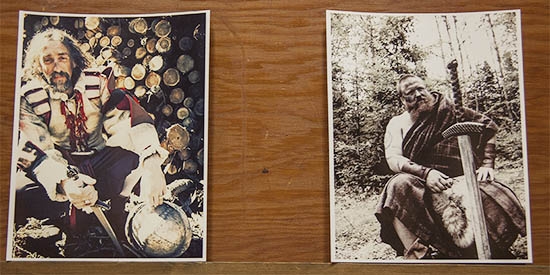 Inside, Christie Negri lined the walls of the Haybarn Theatre with prints from her ongoing project, Re-membering: A Playful Experiment in Photography.  For this project she rented costumes enlisted fellow students to pose as famous historical characters.  Reflecting about the process she wrote: ”It was amazing to see how each participant stepped into the character as they put on the clothes, wig or make up. Watching them transform into the character was truly amazing…I was truly humbled by my community’s reaction to my project. What surprised me most was that people were now approaching me and telling me what character they would like to be….it wasn’t just me recognizing familiar qualities in people that I wanted to elucidate and capture. Now people were responding to qual
ities within themselves that they wanted to…bring to life.”

Two installations brought viewers to little used areas of the Haybarn Theatre.  Backstage provided an ideal location for Barry Whitfield’s performative installation, This is Who We Are: A Journey into Our Past.  Descended from generations of tobacco farmers, Whitfield explored how changing attitudes towards tobacco impacted his family.  A questionnaire offered audience members a chance to share feedback about the impact of his work.

Tucked in the corner of the balcony was Ben Matchstick’s, Cardboard Teck Instantute’s Randomizojustificator.  One by one he offered participants a chance to play:

-Select three oracular orbs.  The orbs are pre-infused with intention, so no further intention should be placed upon them. 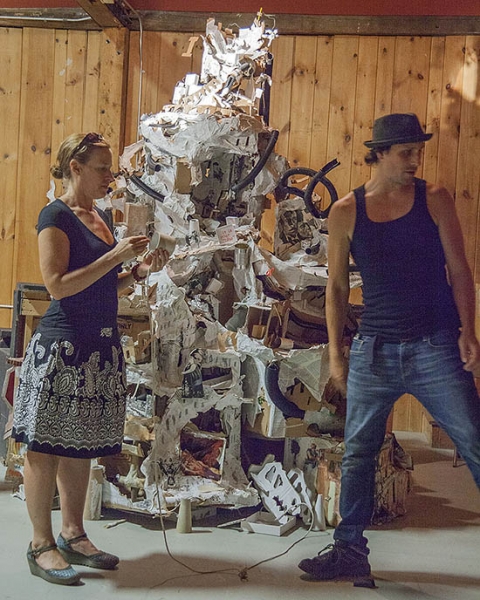 -Next, swallow all saliva.  This will diminish the static conductivity normally associated with oracular monuments of this scale.

-Last, select a CTi associate to serve as your proxy, and drop a course at the Cardboard Teck Instantute. Your Randomizojustification is at hand!  The limitations are endless.

Like the many possible paths the orb might follow through Ben’s sculpture, Art Crawl was full of surprises.  And this was only the beginning of a rich evening.  The video/film festival that followed offered an array of work including clips from longer narratives and documentaries, to stop motion videos, and short humorous commentaries about the life as an art student at Goddard.  Afterwards many headed over to the Music Building and nearby fire circle where conversations about the inventive, innovative work continued well into the night.

All photos by Ruth Wallen and Cynthia Ross.