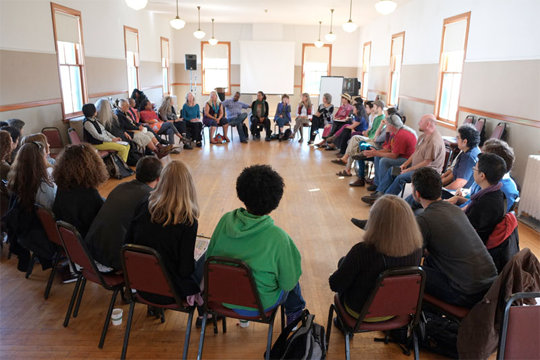 The following was delivered as a graduation speech on September 22, 2013 for the Fall 2013 semester commencement ceremony of the MFA in Interdisciplinary Arts Program in Port Townsend, Washington:

From 2000 to 2007, after studying dance and contemporary performance for many years, I became a practicing artist. I created solo and ensemble works, performed around my native Los Angeles and then nationally and internationally. Through an odd combination of my multidisciplinary training and intercultural identity, I became known as a contemporary dance and theater artist who, whether you enjoyed my work or not, played by his own rules.

From 2000 to 2007, I fulfilled my desire to teach. First through my company’s studio, then city grants and art centers, and later high school, college, and university workshops and classes, I built a part-time career as a movement, dance, theater, and performance educator. Not having formal training or full-time employment as such, I became known for having a personal touch, which was really just me improvising according to what I knew: that each artist possesses a unique story and voice and is capable of becoming, so to speak, a virtuoso on their own instrument.

From 2000 to 2007, I worked as the program manager of 18th Street Arts Center, a contemporary arts center in Santa Monica, CA. As is typical in a community-based non-profit, each staff member wore many hats. At any given moment, I was artist residency coordinator, arts education coordinator, event producer, gallery manager, curator, publicist, grant writer, chauffeur, and the go-to computer guy. I worked with dozens of artists, arts managers, funders, businesspeople, government officials, and community organizers, and most of them knew me as, basically, that guy at 18th Street who does all those things.

So, in 2007, after 18 years of a working adult life and seven years of trying to integrate multiple careers that many colleagues, collaborators, and even friends often saw as disparate or contradictory, I did what any self-respecting, near-middle-age, and very tired creative professional would do… I went back to school.

I quit my job and went for my MFA, and eventually PhD, in the UCLA Department of World Arts and Cultures, otherwise known as WAC. I chose WAC’s program because, despite being housed in one of the largest and most bureaucratic public universities in America, WAC’s academic reputation rested on something that I knew I absolutely needed as a student: namely, interdisciplinarity.

Graduate school was a place for me not only to stretch my wings and take risks, not only to discover unforeseen and unpredictable connections between ways of knowing, creating, and expressing, and not only to be more who I already was as an interdisciplinary person, but more than anything to be seen and treated as such. For the first time in my life, I met with colleagues, teachers, fellow students, researchers, and investigators without worrying that I was being labeled as only this or that. My dance professors welcomed intellectual discussions, and my seminar professors welcomed artistic solutions to scholarly questions. Even department staff, with whom I worked on publicity and marketing, welcomed my artist perspective on how we sold ourselves to the public.

Being a grad student was also hell, of course. Creative and writing deadlines over which I lost countless hours of sleep and during which my wife cooked countless meals, lots of artistic studies and experiments that tested the limits of my ego and pride when they went awry or were criticized openly and without hesitation, tons of shows to see and videos to watch, and seemingly innumerable books, and books, and books, and books. And WAC was no exception to the fact that no academic program is perfect. Everyone who labors so very hard and admirably in higher education knows this fact intimately.

But attaining perfection is not the point. For me, the value of a grad experience, beyond the practicality of improving as an artist, thinker, and social being, was the doing away of any distinction between image and embodiment. When students arrive at college, they have an image of their program and how it may fulfill their goals. Soon, however, the embodied reality of how learning and interpersonal exchange take place looms ever closer.

At Goddard, as the concepts of self-defined interdisciplinarity, no coursework, a cohesive praxis, and ethical engagement are established, cracks in each student’s pre-existing image of college begin to appear. Each time it happens, the student is psycho-physiologically pricked by the mystery of what they are experiencing but have yet to fully comprehend. This feeling is akin to what Roland Barthes, in his book, “Camera Lucida,” termed punctum.

Punctum is a wholly personal feeling rooted in the subjective truth of one’s experience of an image. Barthes was referring to photos, but the idea applies to anything onto which one’s desires or fears are projected, including grad school.

In Goddard’s MFA in Interdisciplinary Arts Program, we are intimately familiar with subjectivity. We are each dedicated to our particular, idiosyncratic view–or image–of the world around us and the work necessary to manifest such vision through artistic means. In the nuts and bolts terms of Goddard’s pedagogy, students create their own study plans, advisors invent forms of communication around the core issues in students’ work, and the dialogue itself between students and advisors becomes the central mode of learning. Thus, if punctum is the subjective truth of experience, and if learning moments at Goddard are also subjective truth, then punctum and the learning moment–at least at Goddard–are one and the same.

Wait a second, you might say. If learning at Goddard all comes down to subjective truth, then what’s actually being learned? And if it’s a co-learning process, then why is only one side paying tuition? The answer is simple… I don’t know. The reason I say this is because “not knowing”–and I don’t mean ignorance but rather the sense of not having judgment or attachment to one form of knowledge–is a necessary part of learning.

Or as the respected Zen teacher Bernie Glassman said at Harvard:

“Think of a clown when you’re thinking of not knowing…. There’s nothing that he does that’s a mistake.” (Glassman, 2007)

As advisors, we experience our students’ learning, and they experience ours as well. Through dialogue, we experienc
e the learning process, which is the root of knowledge, and each person develops, step by painstaking step, their own method of learning and knowing. And by doing this as artists in an MFA program, our learning and knowledge are inherently marked by creativity, mystery, imagination, transformation, and passion.

And once such a process becomes second nature, once you open yourself to greater possibilities while simultaneously holding a mirror to yourself, you also hold it up to the world around you. In this way, by resolving the separation between image and embodiment, we learn to make connections between all manner of disparate elements: the visual and the physical, the ideal and the practical, knowing and not knowing. It’s every kind of situation as well. It’s not only dialogue, but intercultural being. It’s democracy. It’s the cultural commons. It’s everything you can imagine and make happen.

That’s what we do here. It’s a massive, impossibly unwieldy task. It’s often tense, chaotic, and frustrating. It’s also, in my humble opinion, the most necessary mode of reflection and action in the world today. When you address contradictions in your practice, profession, community, and everyday life, you do the work necessary to hold people together. In other words–and as I look to the future of our students graduating today–I believe the ultimate benefit of Goddard’s way of learning is that by fully being yourself, sooner or later, you will do what’s right. Thank you.