Congratulations to all of those with new jobs:
Jessica Bashline (MFAIA ’16) is serving as the Artistic Director of the Sheen Center, a brand new Arts Center with two theaters, four rehearsal studios and an art gallery in downtown Manhattan.
Kylie Casino (MFAIA ’15) has accepted the head jazz instructor position at Columbus State University’s Dance Conservatory in Georgia.
Helen T Clark (MFAIA ’15) has been selected as the new Education and Community Engagement Manager at the Hangar Theatre in Ithaca New York.
Cara Hagan ( MFAIA ’12) has been appointed assistant professor of Dance Studies at Appalachian State University
Carolyn D Landon (MFAIA ‘06) has been hired as full-time art faculty at Oglala Lakota College.
Mark O’Maley (MFAIA ’13) has been appointed to the faculty at the University of Colorado in the Theater and Dance Department.
Amy Plantaggini (MFAIA ’16) has  been appointed Artistic Director of the Ridgefield Conservatory of Dance.
Exhibitions and Performances:
Ronnie Burrage’s (MFAIA ‘16) band will be performing at the Bethesda Blues and Jazz Supper Club on May 29.
Ryan Conarro (MFAIA ’15) presented his solo performance installation “this hour forward” at the Stonington Opera House in Stonington, Maine in May. His next run of the performance will be in October at the Oregon Contemporary Theatre in Eugene. “this hour forward,” which originated as Ryan’s practicum project at Goddard, is an installation of live performance, video, sound, and photography exploring marriage, family, and identity in a time of shifting cultural expectations in America. 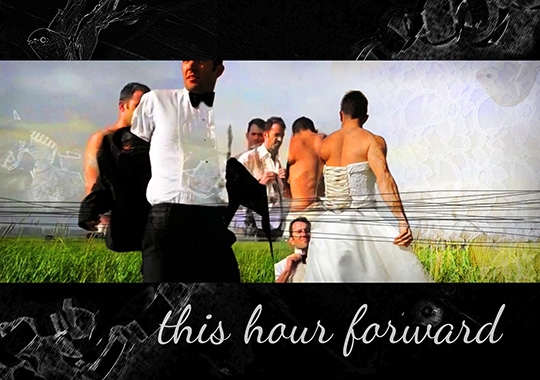 Bridget Connor-Feldbaum’s (MFAIA ’14) play, The Interpreter, which she wrote during her second semester at Goddard will be produced by Arts Center Stage in North Carolina this summer as part of their annual “10×10 in the Triangle” event. Additionally the Baton Rouge Advocate recently wrote an article about an acting class that she is teaching for senior citizens.
Eliot Fisher (MFAIA ’15) and his multimedia performance company, ARCOS will present their new stage work, The Warriors, at the Edinburgh Fringe Festival in August. They have also been awarded artist residencies this fall at Ucross Foundation in Wyoming and Playa in rural Oregon.
“Through a Mirror Darkly”, an exhibition of paintings and photography by Wolf Luman (MFAIA ’16) will be on view at the Jazzmen Gallery in West Hartford, Connecticut opening on June 14.
Nicole Oxendine (MFAIA ‘16) showed the FEMMEdicine banners as part of the Indigenous Knowledge Gathering & International Conference on Intersectionality in Vancouver.
Gwenyth Reitz (MFAIA ’16) is currently directing an interactive production of Macbeth for Lincoln Center Theater’s Education wing.  The play features a six member professional ensemble who are joined at key moments in the play by various members of their student audience.  Prior to this she directed a workshop of Voices of Maycomb County, an original play inspired by To Kill A Mockingbird and written by students from Brooklyn Theater Arts High School.  Performed by a six member professional cast, this workshop was presented at the Vital Theater Company in Manhattan, and starred alum Maggie Keenan-Bolger (MFAIA ‘14). 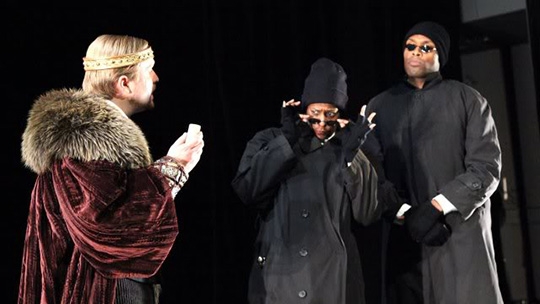 This month Danielle Abrams  will be participating in “The Part of You That is Me: A Reading of Queer, Crossed and Hidden Histories from Multiple Diasporas” at the Bowery Arts + Science and moderating a discussion at Malbec House following “middle passage: a film about racial ambiguity in America” by tomasia. Both in New York.
Rachael Van Fossen and an ensemble of performers known as Encounters are experimenting with performing personal stories and social identities ‘in character’ as a means to build relationship across vastly different life experiences and values. In June Encounters will lead a workshop for the Encuentro conference of the Hemispheric Institute of Performance and Politics. In October the group will offer public presentation of a full-length, multi- and interdisciplinary performance work-in-progress that will reach full production in Fall 2015.