Christine Brubaker  (MFAIA-VT ’15) will present her paper “Quantifying the Subjective: Acting and the Visual Analogue Scale” at the annual conference of Art/Science: The scientific mind in performance and research in St. Catherine, Ontario.
Ryan Conarro (MFAIA-WA ’15) recently performed in the New York premiere of “Juarez: A Documentary Mythology,” an interview-based piece about Ciudad Juarez, Mexico, which has been in development for the past 2 years with his company, Theater Mitu. The ensemble made several visits to Juarez to conduct interviews and research. The production first ran in Juarez in July 2013. In New York, the show is Off-Broadway at the Rattlestick Playwrights Theatre.
Maggie Keenan-Bolger (MFAIA-VT ’14) reflects on being a Point Scholar at Point.  The Point Foundation supported her graduate study at Goddard College. 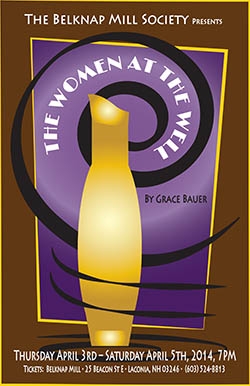 Graduates Sharon (Lajoie) Paquette (MFAIA-VT ’05) Liz Buckley (MFAIA-VT ’05) and Mary Edwards (MFAIA-VT ’07) are collaborating to bring Grace Bauer’s book of poetry The Women at the Well to the stage April 3-5 at The Belknap Mill in Laconia, NH.  Sharon adapted the poetry for the stage; Liz designed the sets, props and graphics; Mary is composing original music for the show.
Sandra Pfeifer’s (MFAIA-VT ’15) documentary, Against All the Odds, winner of the 2012 Route 66 film Festival’s Best Documentary, was broadcasted in honor of African American History Month on WSIU TV, and will have another screening on February 25 at the Metropolis Public Library, in Metropolis, IL.

Hanna Satterlee (MFAIA-VT ’16), along with Marly Spiecer-Schneider, Avi Waring and Maura Gahan, conceived a dance work titled ANIMAL, which will be produced for the public in drafts over the next two years, with a final performance in 2016.  The first draft performance is scheduled for February 28, March 1 and 2 at the Contemporary Dance & Fitness Studio,18 Langdon St, Montpelier VT. 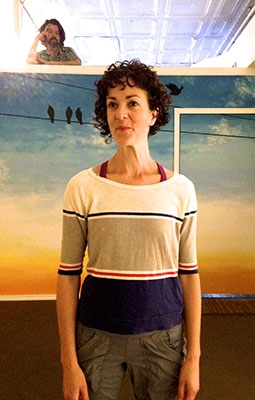 Actors Melissa McNamara and Christopher Donaldson in workshop of THE MACHINE.
Alison Vodnoy Wolf (MFAIA-VT ‘16) had her newest play, THE MACHINE, workshopped and performed in October at Mind Art Core in Chicago, IL. She is currently collaborating with movement company, Pones, Inc. on TRAFFICK, a site-specific production that engage the audience in an interactive experience of human trafficking and healing.
Storme Webber (MFAIA-WA ’14) performed in the 50 Sense Circus, in Vashon, WA. The circus “spotlights the wisdom and skill of veteran female performers who are pushing the limits of what is possible.”
Victoria Zolnoski (MFAIA-VT ’13) and Mark O’Maley (MFAIA-VT ‘13) present their work in an exhibition entitled “Liminal Space, Curiosity, & Re-enchantment” at the Julian Scott Memorial Gallery at Johnson State College, Johnson, VT, February – March 16. 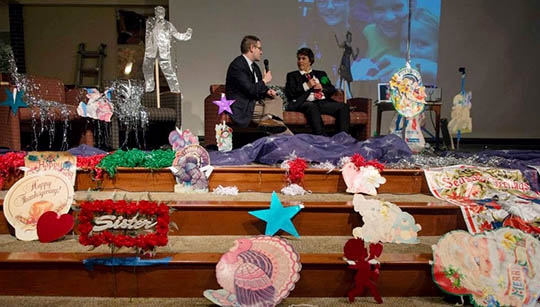 Danielle Abrams performed her work “You Don’t Have to be a Star (Baby) to be in My Show” on February 19th, as part of the exhibition “Becoming Male” at the Freedman Gallery, Albright College, Center for the Arts, Reading, PA. 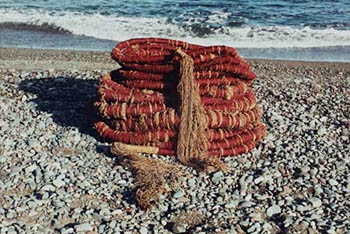 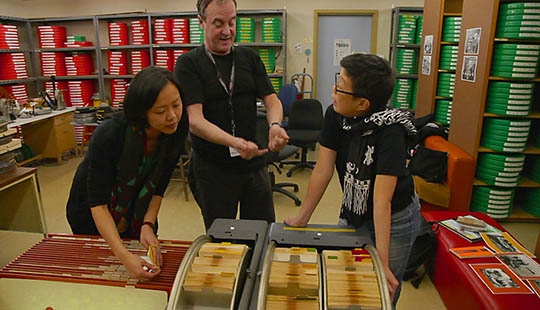 From left to right: Joni Low, CBC archivist Colin Preston, and Laiwan  Photo: John Fukushima
The Vancouver Heritage Foundation has commissioned interdisciplinary artist Laiwan for the public art installation at The Wall, located at the downtown CBC Vancouver Plaza. Laiwan will be creating a large-scale printed artwork focusing on the metaphor of water and expressions of fluidity in the city’s built environment.  Laiwan will also be the guest curator of the Visual Arts Exhibition for the Vancouver Queer Arts Festival to be held at the Roundhouse Arts Center, opening July 23 2014. Her working theme is “Queering the International” where she is researching artists internationally, including Russia, India and South Africa where lives of queers are under threat.
Devora Neumark’s performance work titled ““Imwas / Canada Park (December 21, 2013)” will be represented by a black and white artistic video rendition of the event in the group exhibition, “Founding the New KKL” at the Zochrot Art Gallery, Tel Aviv, Israel/Palestine.  This exhibition aims to critically examine land use by the KKL (Jewish National Fund).  A second performance work by Devora titled “The Jewish Home Beautiful – Revisited” will be represented by a short video in the group exhibition, “The State of Origin: Reel & Imagined,” curated by Bindu Mehra of the Digital Silk Route Collective, at the M.S. University: Baroda, India.