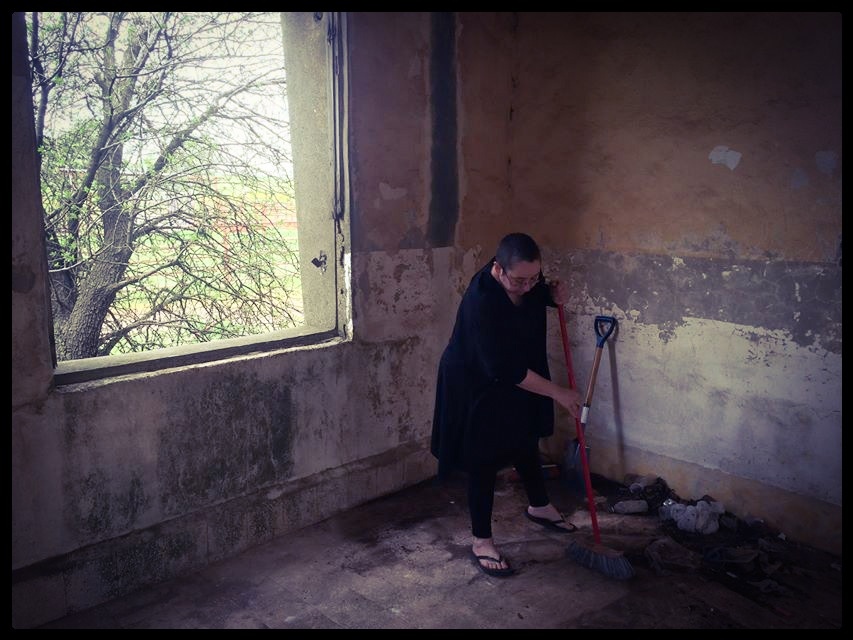 MANSURA REVISITED: A Brief Overview of the Project
[DE] COLONIZER: RESEARCH/ART LABORATORY FOR SOCIAL CHANGE (Eitan Bronstein Aparicio and Eléonore Merza Bronstein Co-Directors)
and DEVORA NEUMARK
JULY 2015
Mansura Revisited is a multilayered life/art project involving the living histories of several generations. It is at once an aesthetic inquiry into the role that the beautification of home plays for refugee populations and a socio-political exploration of the right of return, which is lodged in both the public sphere and the familial dynamics of the participants.
It was Eléonore Merza Bronstein who initiated the project: while pursuing her Ph.D., she collected testimonies from displaced Circassian, Druze, Syrian and Jordanian elders who once resided in the now all-but-destroyed village of Mansura and other demolished villages in the occupied Golan Heights and who are currently living in Syria, Jordan, Israel and France. Despite her efforts, Eléonore was not able to find the ruins of Mansura, the birthplace of her father, who was uprooted from the Occupied Golan in 1967.
In 2011, together with Eitan Bronstein Aparicio – and after further research and interviews with Druze elders from the Golan – Eléonore succeeded to locate, visit and photograph what remained of Mansura. The fact that Eitan, an Israeli, succeeded, together with Eléonore, to find the ruins of this Syrian village is key to their personal and mutual histories, and has made possible the cohabitation of their past and present. Moreover, this encounter is significant for Eléonore’s father: 44 years after his forced departure from Mansura, he finally was able to have access to images of what his home now looks like and touch a stone from the village remains that was brought to him in France, where he now lives. Despite this contact, the deterioration and the filth level of the schoolhouse, which is sole remaining accessible building, added to the sadness of the expulsion and the dispossession.
Ever since their first visit together, Mansura has become an important gathering spot for Eléonore and Eitan: they have continued to document the ruins, have visited the location many times and have initiated a partnership with a local NGO in nearby Majdal Shams called Golan for the Development of the Arab Villages. It has also become a place of gatherings, projects and hope for them and their friends.
In December 2014, while collaborating with me on the performance art project called Imwas/Canada Park, Eléonore extended an invitation to visit Mansura with her and see if there was some way I could engage the range of physical and psychosocial geographies through a live art project. My idea for the project was inspired by a series of photographs taken by Eléonore of Mansura of the decay and accumulated detritus in the schoolhouse. The project would be an opportunity to physically beautify the building and symbolically prepare for hosting the villages’ refugees. What I didn’t know at the time that I conceived of this idea is the importance given to order and cleanliness within the Circassian culture of homemaking: I only found this out in conversation with Eléonore once I identified and proposed the series of gestures to be enacted during the performance event. It was during this conversation that Eléonore recounted what she knew from her father and aunt about the attention to home beautification that was endemic to the way of life of the inhabitants of Mansura.
With funding from the Faculty Development Fund of Goddard College, I travelled to meet Eléonore and Eitan so that the three of us could journey together to enact the performance event. In March 2015, we packed the car with all kinds of cleaning supplies as well as home beautification objects and things and traveled north to spend a long weekend in the occupied Golan Heights and many hours in Mansura. It was an intense physical and affective experience: a lot of manual labour, photo and audio documentation, powerful feelings and raw emotions, unexpected encounters with local inhabitants, and challenging conversations with family members (both Eléonore’s and Eitan’s).
The first part of the day was spent cleaning up a room in the school ruins, making it as beautiful as possible, ready to receive visitors; a metaphor for the welcome return of the refugees. Eléonore documented my labouring gestures, as did the Communications Officer of the Golan for the Development of the Arab Villages. I also documented my presence and the presence of others who accompanied me and at times, contributed to the cleaning process. The second half of the day was devoted to the beautification of the room, as well as conversations with locals and family members and the processing of emotion stirred up by the experience of it all.
The images accompanying this text focus mainly on my cleaning and beautification gestures. The process however is contextualized with visuals of the United Nations presence and military access warnings as well as the sounds of bombing heard from only a few kilometers away. Mansura Revisited was not performed in a vacuum: the ruins of Mansura cannot be abstracted from the contested physical and psychosocial geographies. As an artwork, beyond the living memories of the live art performance, Mansura Revisited continues to circulate as a video projection/installation. The video (to be released within the next several months that includes documentary material from both Eléonore and me and which was created by me in collaboration with videographer Jeroen Deraeve) critically and poetically engages the role that aesthetics can play in regional decolonization while pointing to the symbolic and physical legacies associated with expulsion and occupation. 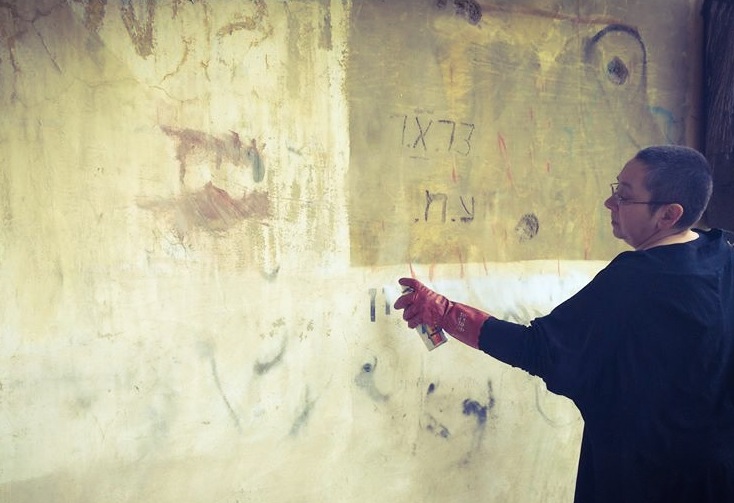 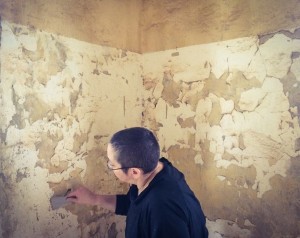 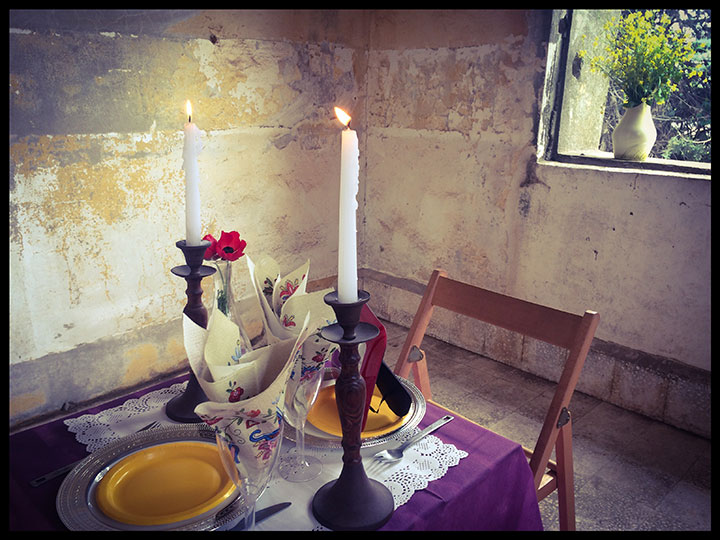 Click links for more info on “Next year in Mansura, Preparing the table for the return of the Refugees”
and for Devora Neumark Faculty Bio