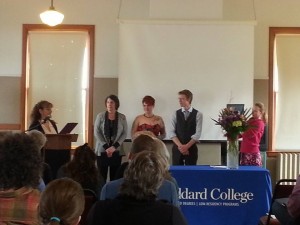 Today you are graduating from Goddard College. I take this very seriously because I too graduated from Goddard College. So did my sister, who runs the most innovative Institute for Sustainability Education in the world. Even now at her age, whenever she is speaking at a conference, no matter where—Beijing, Capetown, South Africa, Trenton—when she starts talking, the epiphanies ping off the walls and inevitably someone will ask her where she learned to think so inclusively and inventively; where did she go to school? When she says Goddard College, they always say: Ah, that is no surprise.
To this day we remain Goddard students, and today I want to pass on to all of you a few of the things I wasn’t able to get to in the time we spent together here (in less than ten minutes). In particular, I want to pass on something that has sustained my sister and I in the darkest of times, and is the greatest gift of a Goddard education: and that is optimism.
When I talk about optimism, I am not talking about hope; hope to me is naive and inactive. It implies a clear outcome. Therefore it seems to me that you can hope for the wrong things and not even know it. And what if hope really does have power? Then you would be creating the wrong things to happen and that would be… wrong. So just in case, I do not engage in hope. I engage in writing, which is fundamentally optimistic, because it is an activity in which we have no  ability at all to predict the outcome.
By writing, we hop on the mind-heart continuum, we become “the next step, the connective tissue, the bridge, the response and the next call.” When we are most depressed about not being published or listened to or lauded or even noticed, we must remember that the very real definition of optimism is to be unsettled, to be aware of the present and the possibilities for the future and the consequences of our actions, of if/then…
When I arrived at Goddard as an undergraduate all I knew was what I didn’t want: I didn’t want to be in the states of Arizona or Illinois, I didn’t want to have to take courses in a room with a person who droned on and on, I didn’t want to do anything irrelevant. That was a word I lived by. In order to find out what it was I did want, I needed to learn what I needed to learn, and then to learn more.
So I learned that George Armstrong Custer’s hubris was an illness.
I learned how to put out a flaming television. Do not use water: televisions are what that foamy stuff inside fire extinguishers is for.
I learned to start a painting by putting my brush in the center of the canvas and pushing the paint out in all directions from there.