BA in Sustainability Program faculty member Catherine Lowther has been collecting stories from VT farmers about how they are adapting to climate change. Here are some of the stories. 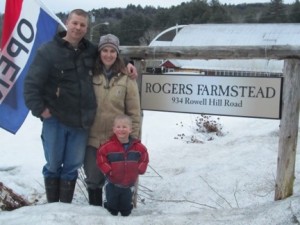 Nate and Jessie Rogers grow grains and keep a small herd of Jersey cows at their farm on the Dog River in Berlin. They grow, harvest, and mill their own grain, and they sell their whole wheat flour, rolled oats, and milk on Saturdays at the Montpelier Farmers’ Market and every day at their farm stand. See: http://www.rogersfarmstead.com
The main climate change issue the Rogers have experienced is river flooding caused by heavy rains. They bought their farm 4 years ago after the property was flooded during Irene. The farm has one mile of river frontage and during Irene, the fields were completely flooded, the house was damaged, and the previous owners had to go out of business. People had to remove a foot of sand to restore the fields, and a two-acre chunk of land washed away. This washout is shaped like a horseshoe, and it enables the water to rise five feet before it overflows, so it protects the fields from flood damage. During the recent rains, the washout filled, and the water did not overflow onto the fields.
When Nate and Jessie first moved to the farm, they wondered if they should fill the horseshoe back in or let it remain as overflow space for the river. After consulting with the Agency of Natural Resources, they decided to let it be.
The Vermont Land Trust also offered to purchase a river corridor easement from them, in effect paying them to take some of their cropland out of use. With their light soils that lift easily and the susceptibility of their fields to flood damage, they decided to accept the easement, and it has just been approved. The easement is fifty feet wide and centered on the river. They can’t farm the land that is within the easement, but they can plant trees in this corridor to strengthen the riverbanks.
The Rogers have planted all their river fields in grasses and perennial crops to strengthen the land, rather than have open soil that could wash away. This means they have 20 acres of river fields that they can’t use as part of their rotation for grains, but it addresses their bigger concern that their land could otherwise be washed down the river. They take water quality very seriously and work with the Natural Resources Conservation Service (NRCS) and the ANR to make sure they have a healthy river that is doing what it needs to do while they still farm the land.

Alan LePage is a fifth generation Vermont farmer and has been growing vegetables organically for 40 years at the LePage Farm in Barre, VT. He sells his produce at the Montpelier Farmer’s Market and shares his knowledge in his radio show “The Curse of the Golden Turnip” on the Goddard College radio station, WGDR, at 91.1 FM or at http://www.wgdr.org Sunday mornings from 6:00-9:00.

The biggest climate change problem Alan has experienced is “gully washer storms,” localized storms when 4 – 6 inches of rain fall in a short period of time. His soil is clay loam and is slow to drain. When that much rain falls in early summer on fresh tilled ground, a farmer can lose everything. There can be serious damage with sandy soil too, but it drains more rapidly. With clay loam there will be standing water, he can’t get onto his fields with equipment for some time, and he has lost crops as a result. To manage these events, he has switched to using extensive raised beds. To create the raised beds, he uses a bog harrow that has two large harrow disks that toss dirt up to the side to form the beds. If the soil is loose, the harrowing alone works fine, but if it is clumpy, it will need to be raked after harrowing.
If water runs off into the valleys on the sides of the beds and the ground is bare, this will create ravines, so he leaves the areas between the beds protected by weeds to hold the soil. To prevent the weeds from going to seed, he trims them with a weed wacker.
He is also making extensive use of plastic to cover beds to protect them against rain. In years with successions of intense rainstorms, he has covered entire seedings with 10×500’ tarps. This is especially helpful when seeding in June for a fall harvest. He has tried using hay mulch, but a big storm will push hay into the mud.
Most of his fields are on a slight incline, and using raised beds has obviated the damage that occurs in intense storms. He has had to be more careful about the placement of beds so that there is less chance of getting a river running through a field. In general, he finds it is very important when planning a sloped field to terrace it to minimize the downward direction of water flow. It also helps to break a field into sections with strips of cover crops that will absorb and break the flow of water.
He has also had to do a lot more plant staking, especially of fava beans. On Memorial Day weekend in 2013, he had 6 inches of rain, and if he hadn’t had his fava beans staked and roped, rain would have knocked them down, they would have gotten caught in the mud, and he would have lost the whole crop. Corn can stand up again after a rain, but fava beans are a Mediterranean plant and aren’t used to intense water events.

Alan is seeing more squash borers and squash bugs. Squash bugs inject a toxin that deforms plants. There can be enormous populations of them in late summer, and their little white progeny sometimes cover the ground. They damage cucumbers and zucchini. He never used to see them, and now they are a perennial problem.
He has also had tarnish plant bugs. These suck plant juices, attack the primary meristem of a plant, and destroy it. They also sting strawberry blossoms so that the fruit is deformed. They are especially active at temperatures in the 90s. Tarnish plant bugs are very difficult to treat. He uses an organic product called Entrust that costs $600/lb., or people can use the same thing in Monterey Garden Insect Spray that is ready to spray on. Growers can use it only three times per season per crop because insects will build up resistance to it, but it does work.

Alan has not had too much trouble with heat as his soils are high in clay and slow to warm. He has noticed that in a very hot summer, it is hard to get lettuce to germinate. It won’t germinate in soils over 75 degrees, goes into dormancy, and comes up next year. He has tried starting seeds in flats under lilac trees and keeping them watered to keep them cool. Spinach also doesn’t like high temperatures, especially if it is late summer seeded and soil temperatures are too high.

Alan has had only one year of drought. Many farmers are near rivers and irrigate their fields from the rivers, but he has a hill farm. In 2001, he had to truck in water to keep his plants alive. Others growing on well-drained land lost a lot. The spring for his house also went dry.

On the positive side, increasing temperatures over the last 30 years have made it possible to plant some crops he could never grow before. September is especially warmer. Sweet potatoes are now viable, especially if there is good soil, and he has had some spectacular sweet potato crops. He is also planting “yard long” beans, an Asian species that requires a long season.