On a recent trip to California, I headed to Santa Barbara to visit one of my favorite art supply stores, Art Essentials, and to see the exhibit of photographer John Divola at the Santa Barbara Museum of Art. Meandering down State Street I encountered four pianos, each a block apart, positioned on the sidewalk near the curb. They appeared to have been old and well loved, rehabbed, and then adorned by artists with colorful painted designs. 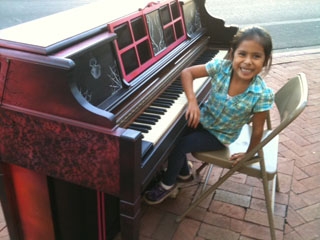 I watched as a man approached, sat down, and began to play. It was an old jazz tune. A woman walked up to him and began singing….she knew the song too. And they really sounded good! No written music. Apparently strangers – improvisation in the street. A little farther down the street, a little girl sat striking the keys and experimenting as her mother patiently waited. At a third piano, a young man maybe the age of a “millennial” played beautiful classical music from memory. 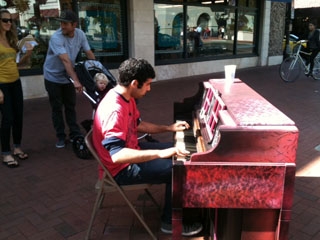 Doing a little research online, I found that the program is called Pianos on State. It is a collaboration between artists and arts and community organizations, and also coincided with the New Noise Festival. What an amazing idea! Bringing expressive arts in the form of music to the streets. Literally in reach for anyone who feels led to play. 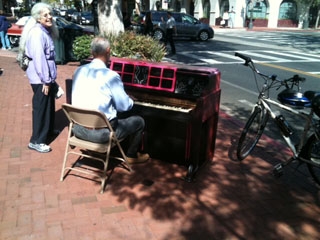 A few weeks later, I was in New Orleans for my Jungian Training Seminar, and guess what I found in the French Quarter? A piano! It was placed at the edge of a little plaza in front of an art gallery. The young man who was playing there was inviting passersby to come back to the piano lessons they had left in childhood. He told me about the classes the piano business, Let’s Play NOLA offers, including group lessons. He told me a story about women, mostly mothers of young children who take lessons together and who celebrate with wine and cheese when they finish a book of songs and exercises (remember, I was in the French Quarter). This project was done also in collaboration with a community group, Young Aspirations Young Artists, that supports young artists like Kawayne Powell, who decorated the piano played on the plaza that day. 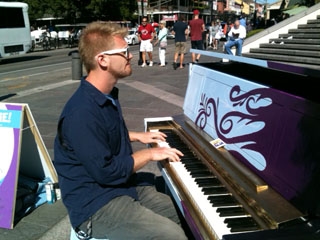 Experiencing the pianos in the streets in these two cities, I was struck by what a perfect “remedy” such expressive arts interventions are for communities of people who have suffered. Since the beginning of the social and economic crisis in this country, people in the U.S have lost a great deal: jobs and the ability to find meaningful work, homes, pensions and retirement funds, opportunities for learning and education. Community-based expressive arts programs provide the opportunity for individuals from varied groups and organizations to collaborate and provide a balm for the healing of any soul who would sit down and play, or sing along, or simply witness what is happening and benefit from being present.