In July 2012, Neely Cohen (BA HAS ’12) reached the final round of Food Network’s “Sweet Genius”– a dessert competition.
Neely and the other remaining contestants awaited instructions on what mystery ingredients they would need to include in their dessert stand-off. The winner of the challenge would get $10,000 and national recognition.
The host, pastry chef Ron Ben-Israel, announced sixty minutes on the clock to make “the best cake of your life” expressing the theme of “the stars” and using the mandatory ingredient – cacao. (The second mandatory ingredient, announced later on in the round, was alfalfa sprouts.)
The moment Neely heard the word cacao, she felt charged. Her Goddard senior study, “Unwrapping Chocolate: An Ethnobotanical Study of Theobroma cacao,” had prepared her well.
How would Neely make use of her vast knowledge of cacao in the sixty stressful minutes of the final cake round?
She decided to make basbousa, a traditional Egyptian semolina honey cake. She roasted the cacao beans, husked them, ground them into cacao nibs and folded them into the cake.
Next, she shaped the basbousa into a star, soaked it in alfalfa syrup, and plated it alongside frozen Greek yogurt atop dark chocolate-covered cacao nibs. Neely added final touches to convey the ethereality and height of “the stars” with a translucent tuile – a paper-thin sugar garnish holding suspended cacao nibs.
Food Network aired Neely’s episode, “Twinkling Genius” on December 13, 2012, and now Neely’s success can go public–she won!
In the judge’s words, “Your star cake tastes as if it came from another land. It’s hearty. It has earthy qualities. It’s grassy and delightful.” 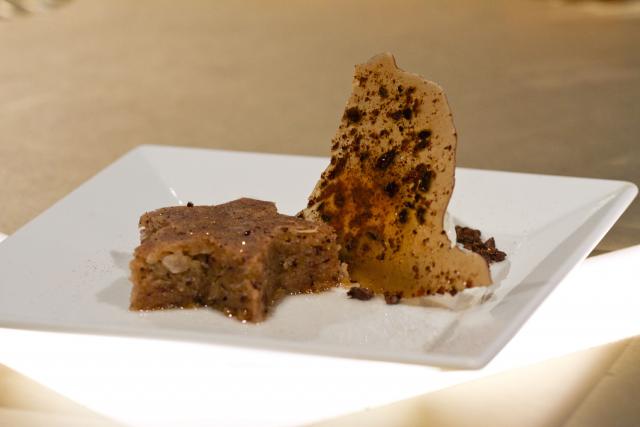 No small measure of Neely’s success was due to her intimate knowledge and love of cacao. Congratulations, Neely, for your “Sweet Genius” success!
You can try one of Neely’s brilliant desserts by visiting Cambridge, Massachusetts, and heading over to Central Kitchen, where she is Executive Pastry Chef.
Photo: Neely Cohen’s Winning Cake as seen on Food Network’s Sweet Genius.