Hartman Deetz (IBA ’15) spoke in March at a Solidarity event in support of US Steelworkers striking over health and safety concerns. Hartman is also a teacher at Deecolonize Academy, “a multi-generational skool 4 the people by the people,” based in Oakland, Calif.

Ya-Ping Douglass (IBA ’16) was arrested in April in an act of civil disobedience in Springfield, Massachusetts, part of a regional #blacklivesmatter (BLM413) action, co-organized by Out Now, an organization led by youth of color. Karen Werner (Faculty) and others attended the court hearing in May to show support for the activists.

Lily Naha (IBA ’15) will represent Goddard in June at the Mountain Justice Summer Convergence, which is building the movement for justice in Appalachia. Thanks to Goddard’s Office of the Academic Dean for financial support.

Myrto Schwab (IBA ‘16) had a “life-changing experience” at the Shalefield Justice Alternative Spring Break in eastern Pennsylvania, where she immersed in anti-fracking direct action and environmental justice strategy. Myrto will be sharing her experiences at the trainings at the Fall 2015 residency. 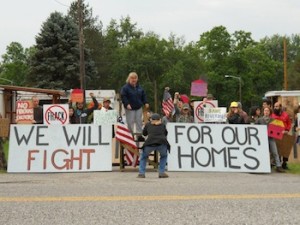 Muriel Shockley (Faculty) has been president of the Goddard College Faculty Union, which is part of United Auto Workers Local 2322, since February 2013.

Eva Swidler (Faculty) attended Philadelphia’s “Philly Fight for 15” event on April 15th, the national day for $15 minimum wage rallies around the country. If you look carefully below, you’ll see Eva’s face. (Hint: behind the red shirt.) 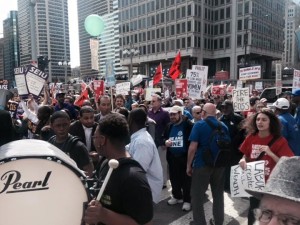 Diana Waters, Muriel Shockley, and Bobby Buchanan (Faculty) will represent Goddard at the US Social Forum in Philadelphia this June. They are leading a Tools for Change workshop, “The Ongoing Goddard College Experiment -Radical Pedagogy as a Force for Social Change and Community Empowerment.” If you are at the Social Forum, be sure to come to their workshop!

Christiana Wyly (IBA ‘15) is coordinator of the My Plate, My Planet Initiative, an informal aggregation of groups supporting sustainability in the 2015 US Dietary Guidelines. My Plate, My Planet is a platform created to elevate the voices of leading environmental and health groups who are working to increase awareness and advocate for the science behind the need for sustainable and healthy dietary guidelines. 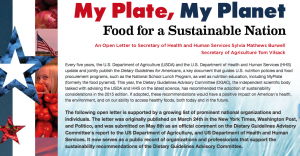 Porter Witsell (IBA ’16), who lives in Baltimore, was part of the medic teams receiving supplies from other cities during recent protests against police brutality and systemic racism. Porter “rinsed out a lot of pepperspray from peoples’ eyes, and did jail support when I could, waiting outside central bookings for people arrested for curfew.”